Last night, I joined an expert group of women on HuffPost Live to talk about Warren Buffett’s Fortune article on the importance of women’s full inclusion into American business, politics, and leadership. Put simply, Buffett argues that women are essential to American growth and success, representing half of the population that has been underutilized (“relegated to the sidelines”) for too long. Stifling half of the country’s talent is not only unethical, he writes, but is also bad business. And, as we know at the Center for American Women and Politics, under-representation of women in political offices is bad for democracy and governance. Our research shows that women bring unique voices to government, as voters, advocates, and elected officials. When in office, women prioritize different issues, build upon unique experiences, and often take a more inclusive and collaborative approach to 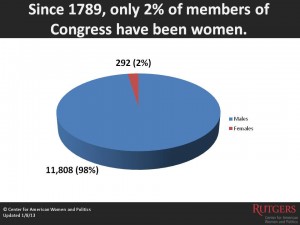 governing. In the current political environment, it’s women who have provided at least some hope of breaking the paralysis that has characterized our nation’s capital. And, with women still representing less than 20% of Congress and under a quarter of state legislative posts, we have significant “human capacity,” in Buffett’s terms, left to be tapped. How do we capitalize on women’s capacity to lead? Buffett calls on his male colleagues to “get on board” with gender parity, but also urges women not to doubt their abilities nor give in to structural or self-imposed barriers to advancement. There is a symbiotic relationship between structural barriers and self-doubt, however, where women’s experiences with (or within) male-dominated institutions make it hard for them to view themselves as equal players in what remains a man’s world. The change that fuels Buffett’s optimism for the future is reliant on disrupting masculine dominance in public life, and that means altering long-held images of and expectations for public leadership. Buffett describes how, as a young man in the 1940s and 1950s, his floor for professional success was the ceiling for his sisters. In other words, society’s expectations for boys were not only greater than those expectations for girls, but women faced structural barriers that halted their path to leadership before they could even dare to see themselves as heads of communities, companies, or countries. Buffett is right to note that those structural barriers are eroding, but societal expectations of how leaders look and act still fall heavily into a male mold. CAWP has recently launched Teach a Girl to Lead, a campaign meant to change those expectations among boys and girls so that the idea of women’s leadership is not extraordinary, but ordinary – and essential. If we are to be as optimistic as Warren Buffett is about America’s future, we know that it’s imperative that future generations of girls and women not only see themselves as public leaders, but help to shatter the glass ceilings that remain in politics and government. That’s not only good for democracy, but it's also best for our country’s bottom line.