Why Electing More Women to Congress is a “Big Thing” 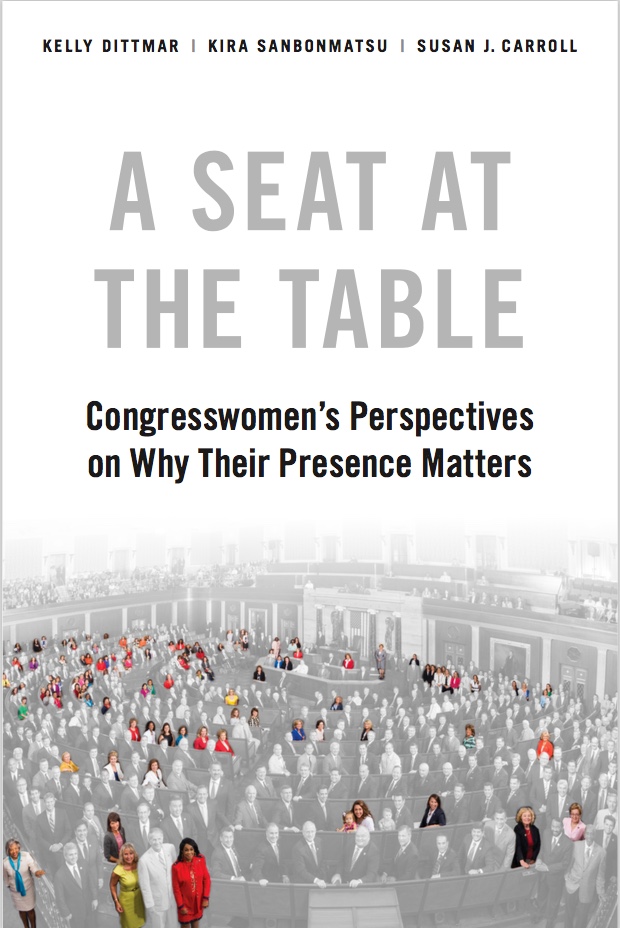 In this record-setting year for women candidates, all eyes are on the campaign trail. But what happens when women are elected? In our new book A Seat at the Table: Congresswomen’s Perspectives on Why Their Presence Matters (Oxford 2018), we use personal interviews we conducted with more than two-thirds of the women serving in the 114th Congress (2015-2017), to illuminate how women both experience and affect Congress. From altering the image of political leadership to influencing policy agendas, congresswomen agree that there a multiple ways in which it matters that they are there.

Women in Congress see an obligation to broaden the public’s image of politicians, be role models for other women and girls, and tap other women to run. As Kathleen Rice (D-NY) commented, “I would be surprised if every other one of my colleagues didn’t say that they felt an enormous responsibility as a role for young women.” Her Republican colleague Representative Elise Stefanik (NY) similarly observed “You have to be aware that you’re a role model for women, and that’s something that I’ve taken to heart.” And Representative Cathy McMorris Rodgers (R-WA) told us that she makes it “a great priority” to encourage talented women she knows to seek a seat in Congress.

There is nothing like seeing women in power to open minds. Representative Joyce Beatty (D-OH) told us “[Having more women of color in Congress] makes a difference when little African American girls can dream that they, too, can serve in Congress.” And Representative Susan Brooks (R-IN) noted that girls need to see leadership as an option but also added that “we have to change the minds of boys and boys who support girls.”

The women we interviewed spoke with great pride about their work on behalf of their districts and states. Representative Martha Roby (R-AL) explained her role on the Veterans’ Affairs (VA) committee in working to ensure “the VA is really meeting the needs of our veterans” in her district and across the nation. After all, she noted, “this is a representative government and I’m here to work on behalf of the people that I represent.”

Oftentimes, the policy change women pursue as members of Congress is aimed at women as a group or at subgroups of women. The women we interviewed explained that without women in Congress, gendered experiences, perspectives, and issues might not enter the debate or receive the attention they deserve.  As Representative Kristi Noem (R-SD) noted, “Most of the voters in this country are women. So they deserve to be represented and have people there that think like they do.” Likewise, House Democratic Leader Nancy Pelosi (CA) echoed many of the women we interviewed when she told us how important it is for American women “to see that someone who may have shared their experience—whether it is to be a working mom or whatever it happens to be—[has] a voice at the table.”

Senator Barbara Boxer (D-CA) said that she and her female colleagues “carry with us the needs of women and their families.” Oftentimes, legislators’ personal experiences as women, as mothers, as daughters, and as grandmothers inform their policy priorities, leading to “a sense of greater responsibility for the family,” according to Senator Heidi Heitkamp (D-ND).

And although they may pursue different policies and disagree with one another on ideological or partisan grounds, the interviews provided many examples of the significance of having women in Congress. As Representative Maxine Waters (D-CA) told us, “Democratic women have carried issues that men just didn’t pay attention to or that were not [even] considered issues.” From women’s health to violence against women and family leave, the women we interviewed provided specific examples of legislation they thought would not have been enacted were it not for women in Congress.

Women of color pursue an “expanded agenda” that addresses gender inequality as well as racial inequality. For Representative Lucille Roybal-Allard (D-CA), that means opening doors “in really meaningful ways” for Latinas and other minorities. A woman’s personal experiences with racial inequality and her obligations to underrepresented groups in the district or state can be the basis for both gendered and racialized understandings of a range of issues. This can create racial differences in representational priorities of women legislators. For example, Representative Gwen Moore (D-WI) told us that mass incarceration tended to be a greater priority issue for Black women legislators compared with White women.

One unexpected finding from our interviews is that women see the feat of winning office as a thread that unites women in Congress. Women in Congress represent different types of districts, have different personal and racial/ethnic backgrounds, and so forth; but they all campaign in what has been a male-dominated sphere. And once in office, they legislate in a male-dominated institution.

Representative Cathy McMorris Rodgers (R-WA) argued “There is a bond among the women members” because of the challenges they face serving in Congress. And Representative Kathleen Rice (D-NY) observed, “We know the struggle of actually trying to put together a winning campaign” with financial and political infrastructure that was “not already premade for us like it is for men.”

Moreover, women’s single-sex activities such as dinners, trips, and softball, can ease partisan divisions and build friendships among women. Thus despite significant partisan polarization in Congress, we find that women in Congress can feel a sense of comradery with their colleagues across the aisle on the basis of gender. The fact of women’s underrepresentation in politics is what makes the presence of women in politics a “big thing,” as Representative Yvette Clarke (D-NY) explained: “We will run into women who will say, ‘Well, so what you’re a woman in Congress? That’s no big thing.’ But actually, it is.”

Order your copy of A Seat the Table today at Oxford University Press or on Amazon.

Kira Sanbonmatsu is Professor of Political Science at Rutgers University and Senior Scholar at the Center for American Women and Politics (CAWP) at the Eagleton Institute of Politics. Her research interests include gender, race/ethnicity, parties, public opinion, and state politics. Her most recent book, coauthored with Kelly Dittmar and Susan J. Carroll, is A Seat at the Table: Congresswomen's Perspectives on Why Their Presence Matters (Oxford University Press, 2018). She is also the coauthor (with Susan J. Carroll) of More Women Can Run: Gender and Pathways to the State Legislatures(Oxford University Press, 2013). Sanbonmatsu coauthored the CAWP reports Representation Matters: Women in the U.S. Congress (2017) and Poised to Run: Women's Pathways to the State Legislatures (2009). She is also the author of Where Women Run: Gender and Party in the American States (University of Michigan Press, 2006) and Democrats, Republicans, and the Politics of Women's Place (University of Michigan Press, 2002). Her articles have appeared in such journals as American Journal of Political Science, Politics & Gender, and Party Politics. She co-edits the CAWP Series in Gender and American Politics at the University of Michigan Press with Susan J. Carroll. Sanbonmatsu received her B.A. from the University of Massachusetts-Amherst and her Ph.D. from Harvard University. She was previously Associate Professor of Political Science at The Ohio State University.

Susan J. Carroll is professor of political science and women’s and gender studies at Rutgers University and senior scholar at the Center for American Women and Politics (CAWP) of the Eagleton Institute of Politics. Her books include: A Seat at the Table: Congresswomen’s Perspectives on Why Their Presence Matters (Oxford forthcoming 2018, with Kelly Dittmar and Kira Sanbonmatsu); Gender and Elections: Shaping the Future of American Politics (Fourth Edition, Cambridge 2018, with Richard L. Fox); More Women Can Run: Gender and Pathways to State Legislatures (Oxford 2013, with Kira Sanbonmatsu); Women and American Politics: New Questions, New Directions (Oxford 2003); The Impact of Women in Public Office (Indiana 2001); and Women as Candidates in American Politics (Second Edition, Indiana 1994). Carroll also has published numerous journal articles and book chapters focusing on women candidates, voters, elected officials, and political appointees in the United States. Carroll is a founder and former president of the Organized Section for Women and Politics Research of the American Political Science Association, and she currently co-edits the CAWP Series in Gender and American Politics, a book series published by the University of Michigan Press. She is the recipient of the Lifetime Contribution to Political Studies Award of the Political Studies Association in the United Kingdom as well as the Outstanding Professional Achievement Award from the Women’s Caucus of the Midwest Political Science Association. As a nationally recognized expert on women’s political participation, Carroll is frequently called upon for media commentary.