After Iowa: Is Sexism Weighing Warren Down?

Women candidates still face substantial barriers within the Democratic Party. While Democratic voters, on the whole, are less sexist than Americans in general, there is still substantial sexism among Democratic primary voters, and it has a real impact on support for female candidates. While there are plenty of reasons why a voter might not support a particular candidate, sexism still seems to be a significant barrier facing the women seeking the Democratic nomination.

Sexism and candidate choice in the Democratic primary

In a Data For Progress survey taken last year Democratic primary voters with higher sexism scores were much less likely to support female candidates in general, and Massachusetts Senator Elizabeth Warren in particular. In a closely contested primary, this can have an outsize impact on the race even if relatively few Democrats score on the very high end of sexism scales. Because the data is from last year, these figures shouldn’t be taken as indications of current levels of support for the candidates, but rather as an indication of the impact of durable characteristics on how voters see the candidates. 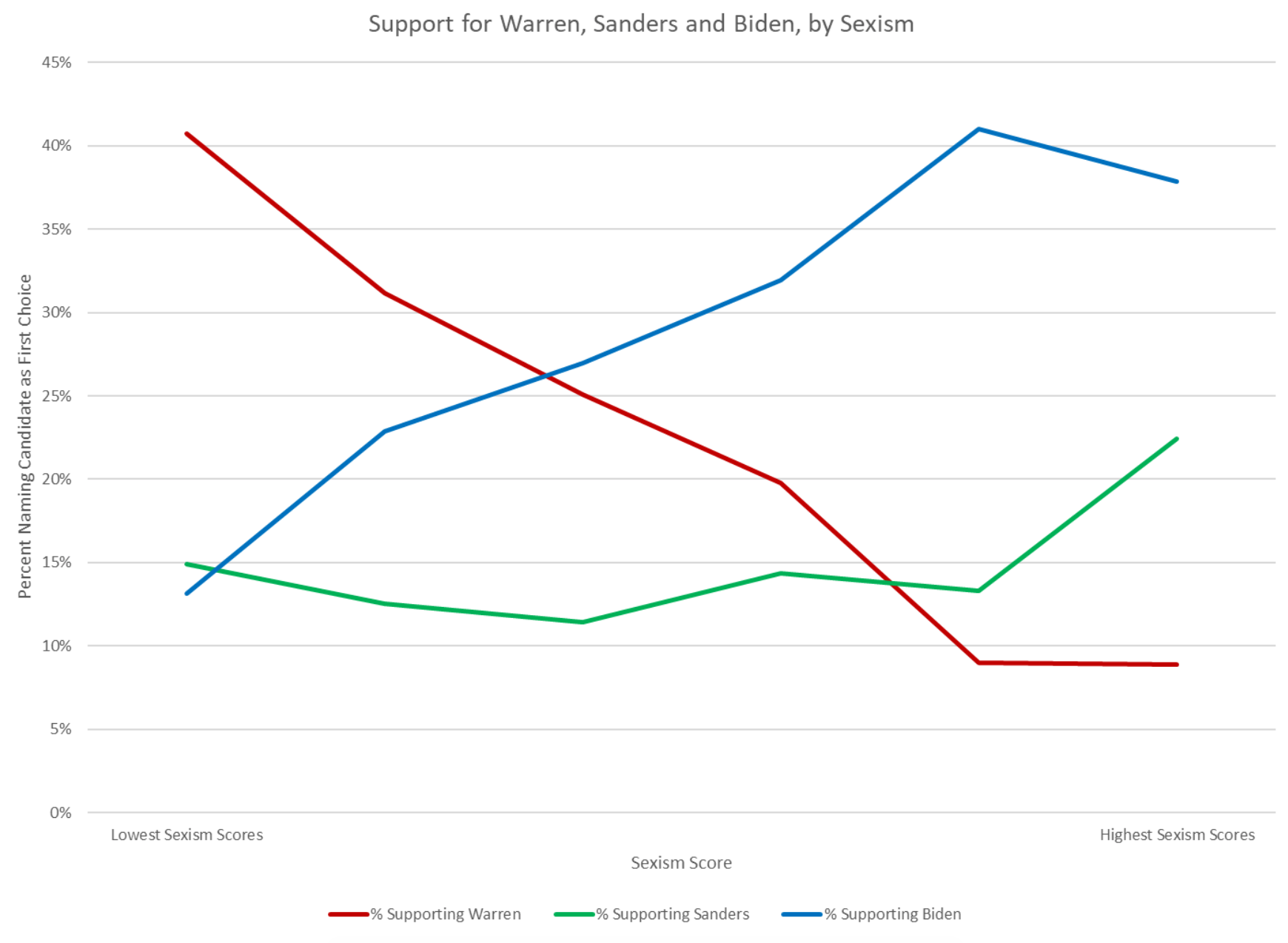 Sexism is a contested concept, but its measure in this survey was fairly straightforward. Respondents were asked how much they agreed with a series of statements, like “Women are too easily offended,” or “Most women fail to appreciate fully all that men do for them.” People who “strongly agree” with such statements were scored as more sexist than those who agreed less strongly, or disagreed with them altogether. While the overwhelming majority of respondents fell in the low-sexism range, around a quarter of Democrats scored moderate to high levels of sexism. As you might expect, sexism was higher among men, declined with respondents’ education, and was slightly higher among older Democrats. Non-white voters also scored higher on sexism than white voters, with the biggest gap coming between white and non-white men.

Are sexists just worried about electability?

Of course, there might be other reasons why female candidates, and Warren in particular, are falling short among voters with higher levels of sexism. It might be due to concerns among Democrats, driven by the outcome of the 2016 election, that women just aren’t as electable as men, or worries about Warren’s liberalism. If we’re to believe that sexism is driving down Warren’s support, we should make sure to eliminate these other expectations.

To look at electability, we can make use of a conjoint experiment embedded in the same survey. In a conjoint experiment, respondents are presented with hypothetical candidates, with randomly selected traits, and asked to choose between them. Because these choices aren’t about any particular candidate, they allow researchers to look at the effect of the various traits, like sex, age, race and policy positions, when separated from actual candidates. In this survey, respondents were also asked about the electability of the hypothetical candidates. 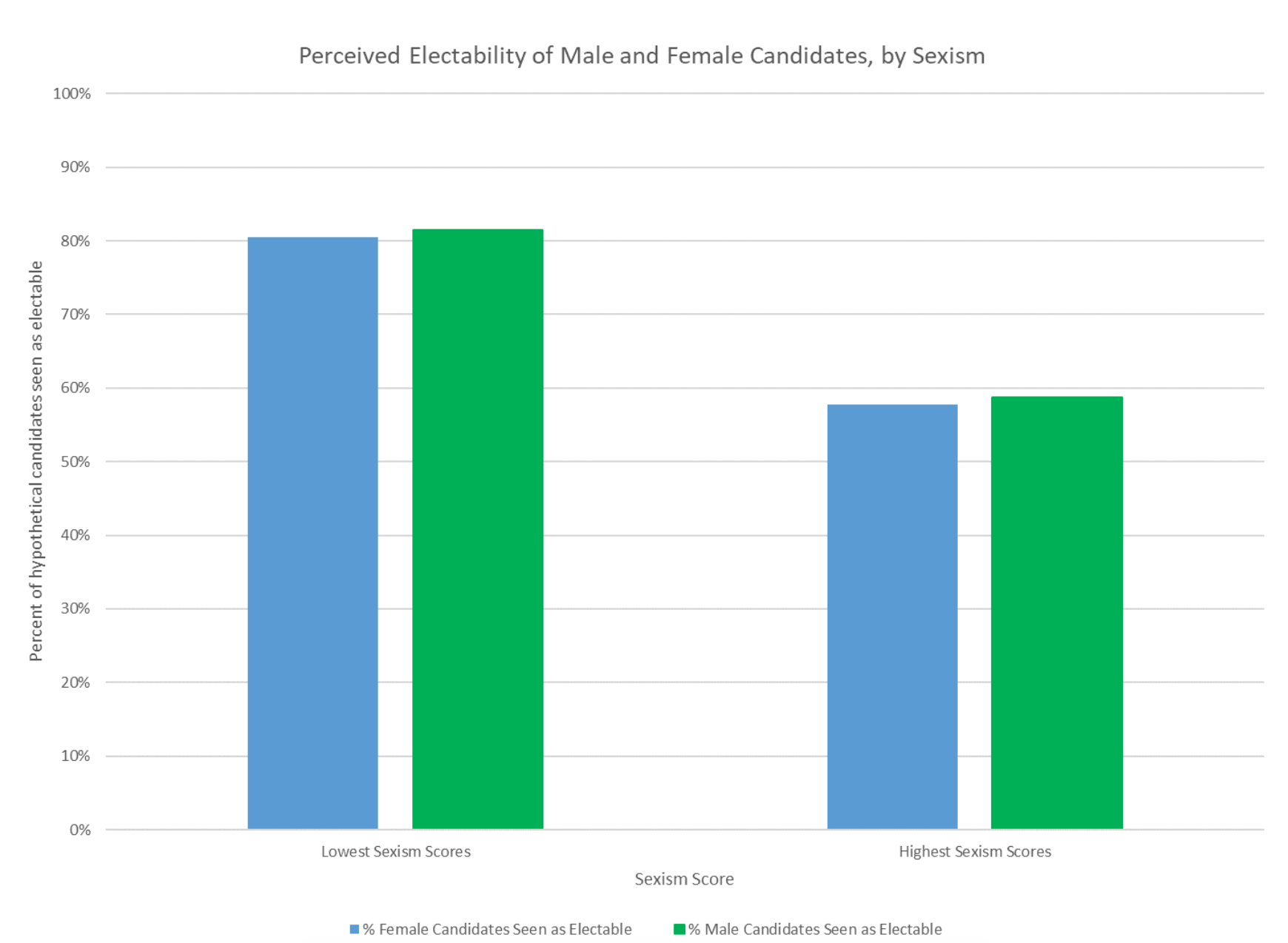 The perceived electability gap between male and female candidates for sexism scores in the middle of the distribution is never more than about 3 points. While there is interplay between sexism and candidate preference broadly, there’s no evidence that sexism makes Democrats think that women in particular are less electable.

The effect of Warren’s liberalism is harder to pin down. Among both men and women, Democrats who say that they’re moderate have higher sexism scores than those who identify as liberal. Conservative Democrats have even higher scores, but there just aren’t many of them voting in the primaries. Since moderate Democrats have higher sexism scores, it could be their ideology, rather than sexism, pulling support away from Warren.

To separate out the effects of sexism and ideology, we can use regression analysis, a statistical technique that allows us to examine the effect of one factor while holding others constant. The results show that support for Warren is linked not just to the sexism or liberalism of voters, but by the interaction of the two. If concerns about her liberalism were driving away primary voters, rather than sexism, it should be the case that sexism should matter less for self-identified liberal Democrats, and more for self-identified moderate Democrats.

What we see in the numbers is the exact opposite. Among liberal Democrats, who are more likely to be agreeing with Warren on the issues, sexism reduces support for her more than it does among moderate Democrats. Sexism reduces support for Warren generally, but the fact that it matters more to liberals than to moderates tells us that it isn’t her ideology driving voters away, but rather their views of women.

So where are these sexist liberals going? The obvious answer is to liberal male candidates, like Sanders. But while there may be a belief that Sanders has benefitted from sexism in the Democratic electorate, he doesn’t seem to be the main beneficiary here. While higher levels of sexism do increase the likelihood that a voter will support the Vermont Senator, the effects are small, and not larger among liberals than among moderates.

Instead, the main beneficiary of sexism among liberal Democrats seems to be a candidate perceived as more moderate: Joe Biden. Sexism has only a small impact on Biden’s support among moderate Democrats, but sexism dramatically increases his support among liberal Democrats, a group that otherwise doesn’t seem like his natural constituency. It seems likely that Biden’s appeals to traditional gender roles – offering to take on President Trump in a fist-fight, for instance – may be winning over liberal Democrats who hold more sexist views, despite their ideological differences. 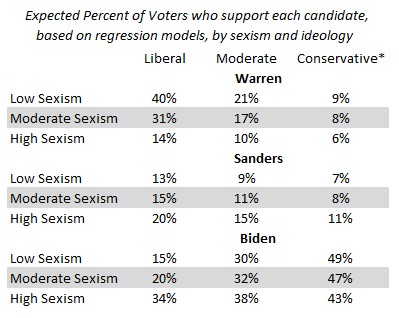 Sexism and the general election

Sexism also shapes voters’ responses to Warren and other female candidates in ways that are potentially more troubling for Democrats. Sexism is not only driving Democrats away from Warren in the primaries, but may also drive them towards Trump in the general election. In the Data For Progress survey, voters who indicated that they weren’t even considering voting for a candidate were asked what they would do if that candidate were to get the nomination. So, for instance, 67 percent of Democrats who said that they wouldn’t consider voting for Biden in the primary said that they’d support him in the general against Trump. Only 7 percent of Biden supporters said that they’d support Trump instead. For Warren, the numbers were rather different: among Democrats not considering Warren with low sexism scores, 58 percent say that they’d support her in the general, not far off from Biden’s numbers. The percent who would vote for Trump is about the same as well, at about 6 percent. However, among the group with moderate or high sexism scores, just 35 percent say that they’d vote for her in the general, only slightly more than the 32 percent who say that they’d vote for Trump instead. 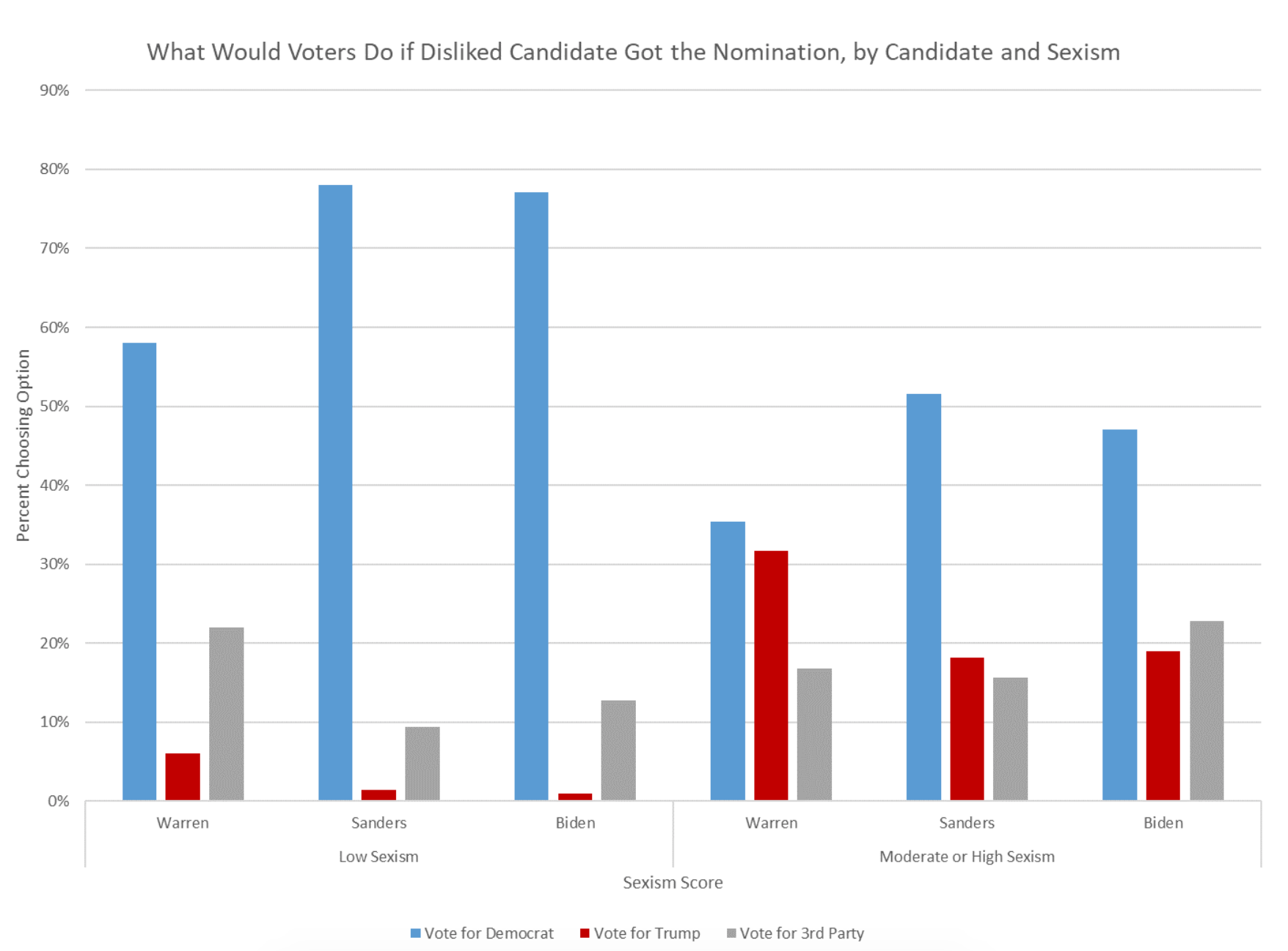 Of course, these figures are subject to change, and likely have changed since the data was collected last year, but there’s no reason to believe that the underlying sexism of the Democratic electorate has changed overmuch, nor the impact sexism has on the views voters hold of candidates.

None of this should be taken to mean that female candidates can’t win. Of course they can. Hillary Clinton won the popular vote in 2016; women Congressional candidates in 2018 won at higher rates than their male counterparts. But the fact that women do win doesn’t mean that there aren’t still barriers making those victories harder than they would be for similarly situated male candidates. This doesn’t mean that supporters of a particular candidate, or members of a particular party are all sexist. As noted above, the majority of Democrats studied here scored low on the sexism scale. But sexism is a trait that exists to some extent in many voters, male and female, Democratic and Republican, and even in subtle forms, it can present real problems for female candidates.

Even in 2020, and even among the Democratic primary electorate, a group that’s thought to be more progressive on gender issues, sexism presents an additional hurdle that male candidates just don’t have to contend with. Of course, voters in the Democratic primary are also worried about the electability of candidates, and of course the ideology of the candidates plays into their decision-making process, but sexism plays a role above and beyond these concerns. To make matters worse, even discussing sexism may exacerbate the effects of sexism on the perceived electability of female candidates. Combine this with the fact that a significant portion of the Democratic electorate has said they won’t rally around Warren in the general election, and it becomes clear that the barriers to a woman winning the presidency still seem formidable. Of course women can win, but if the election is a race, women are still doing it like Ginger Rogers: backwards and in high heels. 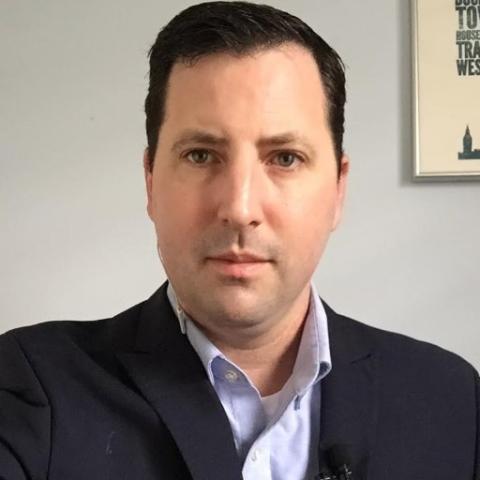 Dan Cassino is an associate professor of government and politics at Fairleigh Dickinson University and the director of experimental research at the FDU Poll.