Every year, the Center for American Women and Politics supports an internship through the Rutgers-Eagleton Washington Internship Award Program that provides financial assistance to interns in the nation’s capital. This is made possible due to the generosity of Susan N. Wilson in establishing the Katherine K. Neuberger Legacy Fund in honor of her mother, a prominent figure in New Jersey Republican politics. Neuberger Fund internships are awarded to Rutgers University–New Brunswick undergraduates who have secured for themselves a Washington-based political internship. This year’s Neuberger intern is Hallie Meisler, a rising senior majoring in women’s and gender studies with dual minors in political science and comparative and critical race and ethnic studies.

In the following interview, we discuss with Meisler her interests and background in politics and her aspirations for both this internship and her future career.

What inspires you to get involved with politics? 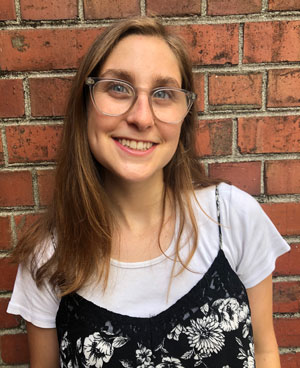 I chose to get into politics to assure that everyone has a voice so not just a minority of views are heard. When I was first able to vote, I naively assumed that voting was the only thing I could do to support the candidate I wanted to get into office. I soon learned that to have an impact on an election, there is much more to do before stepping into the voting booth on Election Day. As I continued my education in Women’s and Gender Studies, I became increasingly frustrated at the lack of female representation in the political sphere. I could not wrap my head around the fact that decisions, for example, on women’s rights were being made almost exclusively by old, white men. This lack of diversity is what fueled my involvement in politics. I knew that if I wanted my voice and those of the vast majority of Americans to be heard, it would be essential that we move to elect representatives who would pursue policies more supportive of women and minorities at all levels of government. Until women and people of color have proportionate representation in politics, I will have work to do.

What was your first election as a voter and what did you feel when you cast your first ballot?
I cast my first vote in the 2016 presidential election. I was so proud to be voting, especially since I voted in Virginia, which was viewed as a swing state at the time. The prospect of the 2016 election had really engaged me in political action—for the first time I was researching the voting records of candidates, reading news stories from various outlets, and staying up late to watch every debate. I wanted to make sure I was informed and prepared to cast my vote wisely. Being able to vote was exciting but made me feel both nervous and filled with hope. Even though voting made feel proud that I had done my civic duty, I realize now that my engagement and my commitment to civic duty was not enough, and how much more voter engagement in my generation was necessary in that election.

In the 2018 election, you volunteered with a congressional campaign. How did you get involved and what was that experience like?
Before the 2018 election, I volunteered with a local organization—NJ 11th for Change—which aims to educate citizens on the voting record of their representatives and to explain how the process of gerrymandering impacted our district. Through this volunteer work, I became passionate about supporting a candidate who reflected the ideals that mattered to the majority of my congressional district. I was compelled to volunteer to ensure that whoever filled the seat in the 11th congressional district would do so with the needs and views I wished to see addressed. Volunteering for Mikie Sherill was an amazing experience for so many reasons. Canvassing and phone banking is no easy task, but it really felt worth it because I believed in the candidate. Working to elect a strong woman made me hopeful about the future of Congress and US politics, in general. Knowing that I had a direct role in helping fill a congressional seat with an amazing female politician made the experience of volunteering for a campaign life-changing, and I knew from that moment on I wanted to dedicate myself to this work.

Why did you want to take this opportunity to intern in Washington, DC?
I chose to seek an internship in Washington, DC to be in the center of the national political sphere. While I could have applied to Planned Parenthood centers all across the country, to be in Washington, D.C. would give me the opportunity to advocate on Capitol Hill and garner support from various representatives for the causes at the heart of preserving the mission of Planned Parenthood Federation. As the future of Planned Parenthood remains increasingly insecure, I felt a pull to be in DC where critical decisions were being made in order to fully advocate as an engaged intern on behalf of the many women and men who desperately depend on this organization for critical health care.

How did you choose the organization you'll be interning with?
I have been volunteering for various Planned Parenthoods across the country, as well as participating in the Rutgers chapter of the Planned Parenthood Action Fund. I have done research papers on the founder of the organization, and I was given the ultimate privilege as a scholar at the Institute for Women’s Leadership to interview Cecile Richards, the former president. I am so thankful that the Eagleton Institute of Politics and the Neuberger Fund have recognized me with the opportunity to fulfill a career goal.

What do you hope to get out of your DC political internship experience?
I hope to grow as a political organizer and refine my skills as a communicator for the causes I am passionate about. I know that if I can learn to effectively organize and advocate in the center of US governance—Washington DC—I will be able to employ the skills gained wherever I go after I graduate. Since this is my first internship, I hope this summer experience will instill in me a level of motivation to continue to advocate for more women and issues of social justice in the political sphere.

Is there anything you're trepidatious about in taking on this internship?
Even as I am passionate about the causes pursued by this organization, I am sure that I will come across individuals throughout my internship who will question my efforts. I recognize that this will bring an added level of challenge and difficulty to my role, but I also realize that engaging with individuals who have different viewpoints is often the most important way to make progress. As a public advocacy intern, I welcome the challenge to connect with everyone, not just those who share my ideals, and I am sure this will further enrich my experience and strengthen my skills as a communicator and advocate.

What do you hope to get out of your stay in DC outside of your direct internship experience?
Throughout my time in DC, I hope to strengthen my networking skills. I am keenly aware of how important it is to make connections with political leaders and those in government. So, while I am in the seat of the US government, I hope to maximize my time and experiences meeting others who seek to advocate for other compelling social justice causes. Especially as a woman in a heavily male environment, I know how important it is to make connections with a wide range of professionals. In this way, I hope to challenge myself to reach out to people who can mentor me, give me advice, and help further my aspirations.

What are your goals in terms of your own political engagement and career?
My ultimate career goal is to work to empower and elect more women to positions in the political sphere—whether that means working with organizations that support women who are considering running for office, seeking to recruit potential female candidates, or working on campaigns for women I would like to help get elected.

Stay tuned to the CAWP blog later this summer for a guest post from Hallie about her internship experiences and how her D.C. summer has impacted her planning for her future in politics.

Learn more about this internship and Katherine K. Neuberger at the Nueberger fund page on the CAWP website, and find out how you can contribute to the CAWP mission through a legacy fund here.

This interview has been edited and condensed. Opinions expressed by interviewees do not represent the opinions of the Center.