Breaking Even: Women in the U.S. Senate 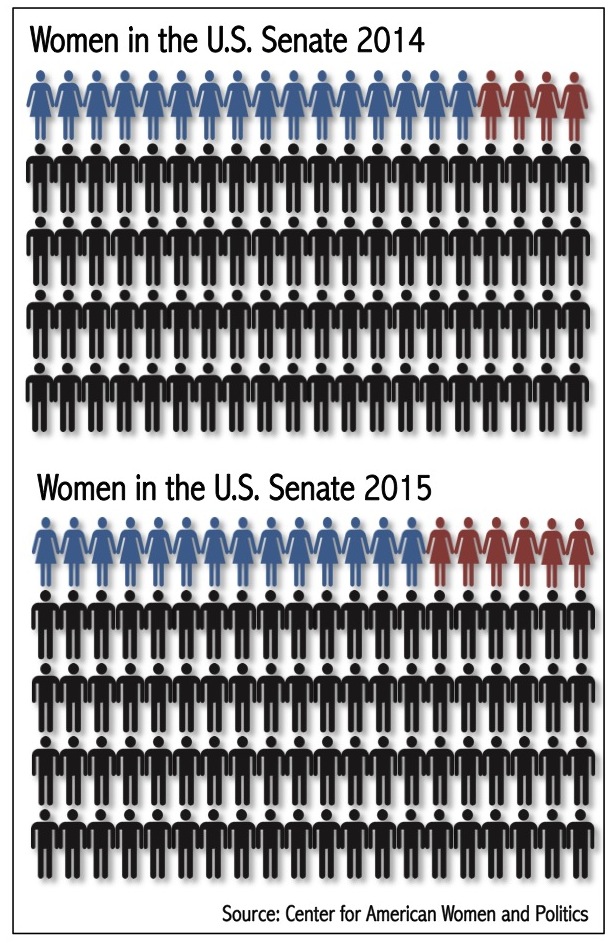 It’s official. We started election 2014 with 20 women in the U.S. Senate and we will enter the 114th Congress with 20 women in the U.S. Senate. With Senator Mary Landrieu’s (D-LA) defeat this weekend, the status quo is upheld. However, the make-up of the women members will be different in 2015. Two new women senators were elected in 2014, including Representative Shelley Moore Capito (R-WV) and State Senator Joni Ernst (R-IA). They take the place of two women who were defeated in their bids for re-election: one-term incumbent Senator Kay Hagan (D-NC) and three-term incumbent Mary Landrieu (D-LA).  As a result, the partisan make-up of the women senators will shift from 80 to 70 percent Democratic; 14 Democratic women and 6 Republican women will serve in the 114th Congress. And while no records were broken for the number of women candidates, nominees, or winners in U.S. Senate races this year, both female newcomers do make history as the first female Senators from their states. In fact, Ernst becomes the first woman ever sent to Congress from the state of Iowa. Together, Capito, Ernst, and the 4 current Republican women senators will make up the largest class of Republican women to serve at one time in the U.S. Senate. Incumbents Jeanne Shaheen (D-NH) and Susan Collins (R-ME) were re-elected in 2014, but only 4 of 15 total female Senate nominees were successful this year. This year’s four female winners join the 16 women senators not up for re-election this year, including only one woman of color: Senator Mazie Hirono (D-HI). While many celebrated the jump to 20 women in the Senate after the 2012 elections, election 2014 serves as a reminder that the pace of progress for women in the U.S. Senate is inconsistent and, most striking, slow. That pace is unlikely to quicken without a steady increase in the number of women candidates filing for competitive seats and making it through their primaries.

The balance of gender power in the U.S. Senate is not only measured in overall numbers, but also in the power women hold in party and committee leadership. Due to the shift in party power from the 113th to 114th Congress, Democratic women who currently hold 9 committee chairmanships and co-chairmanships will lose their leadership posts. There are fewer Republican women with the seniority needed to win these positions, making it likely that the number of women committee chairs will decline in the 114th Congress. Republican women will also make up a much smaller proportion of the Republican caucus (11.1%) than Democratic women's proportion of the Democratic caucus (30.4%), presenting another potential hurdle to their influence in agenda-setting and strategy discussions within the majority party. Five more women senators will be up for re-election in 2016, but it will take a larger class of nominees for open seats or as competitive challengers to see significant change in women’s representation in the upper chamber of Congress in the next election.
2014 Election
Candidacy
Congress
senate