Are Women Reshaping the Political Donor Class? Money Matters in the Upcoming Races for Governor
Money and Gubernatorial Races: How are Women Faring as Candidates and Donors?
A Record Number of Women will Serve in State Legislatures in 2021
Results: Women Candidates in the 2020 Elections
President Trump’s appeals to women show that the more things change, the more they stay the same

Women in the 114th Congress

Women in the 114th Congress, by Chamber 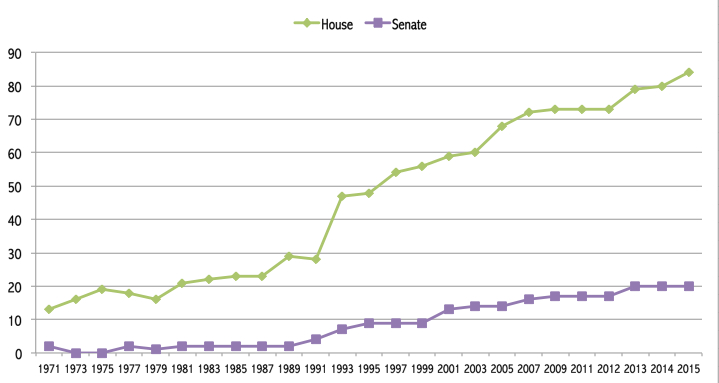 Just under one-third of women members in the 114th Congress are women of color. A record 32 women of color (29D, 3R) will serve in the House, making up 38% of women in that chamber. In the Senate, however, Mazie Hirono (D-HI) remains the only woman of color among 20 female members (5%). Thirty women of color (28D, 2R) served in the 113th Congress before November, increasing by one (31: 29D, 2R) with Adams’ special election.

New Women in Congress, by Chamber and Congress

States Four states – IA, NJ, UT, and VA – will go from no women representing them in the 113th Congress to one woman in their congressional delegations in 2015. Senator Joni Ernst (R-IA) is the first woman ever to serve in Congress from Iowa. Representatives Bonnie Watson Coleman (D-NJ) and Mia Love (R-UT) are the first Black women to represent their states in Congress. Representative Barbara Comstock (R-VA) is the first woman to serve in Virginia’s congressional delegation in two decades. Two states – PA and LA – will go from having one woman representing them in the 113th Congress to no women in their congressional delegations in 2015. They will join 11 other states that continue to have all-male delegations in Washington: AR, DE, GA, ID, KY, MS, MT, OK, RI, SC, and VT. Among these states, MS and VT have never had women in their congressional delegations; the others have had women in the past. Parties As the Republicans take over both chambers of Congress, women represent 9.3% of all majority members (38 of 301). Women are 11.1% of all Republicans in the Senate (6 of 54) and just 8.9% of all Republicans in the House (22 of 247) in 2015. Despite Republican gains overall in the 2014 elections, Republican women remain a small percentage of their congressional caucuses. In the 113th Congress, Republican women were 8.2% of all Republican members, including 8.9% of Republican Senators and 8.1% of Republican Representatives. Democratic women, on the other hand, represent one-third of all Democratic members of Congress in 2015 (76 of 234). Women are 30.4% of all Democrats in the Senate (14 of 46) and 33% of all Democrats in the House (62 of 188). In the 113th Congress, Democratic women were 30.3% of all Democratic members, including 30.2% of Democratic Senators and 30.3% of Democratic Representatives.

Women in Party Caucuses, by Chamber and Congress

[1] Adams will serve in her first full term in the 114th Congress, also serving two months at the conclusion of the 113th Congress.
Congress
Race
young women