The Center for American Women and Politics (CAWP) created NEW Leadership™ in 1991 to teach college women the value of civic engagement and the importance of having women in positions of political leadership. The NEW Leadership™ National Network includes colleges and universities across the country that have established statewide or regional NEW LeadershipTM programs on their campuses.

Increased Interest in Politics
The survey results confirm that NEW Leadership™ has been successful in inspiring the vast majority of alumnae to participate in politics, educating them about the political process and increasing their overall confidence and leadership skills. 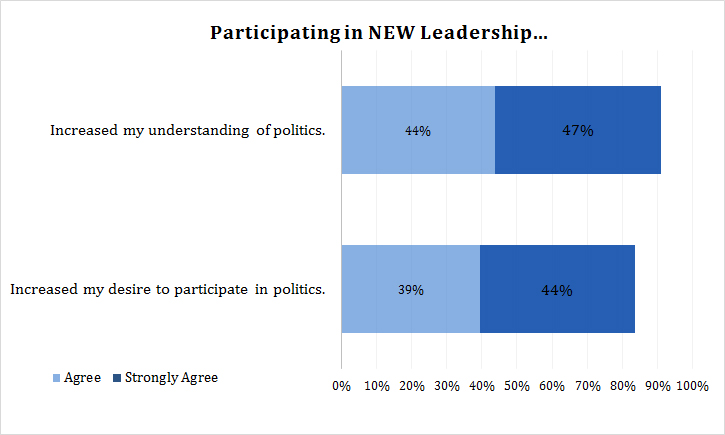 Our survey data confirm that one of the program’s most transformative effects on participants is increasing their confidence in themselves and their own leadership abilities. Among the leadership abilities respondents said had improved most through participation in NEW Leadership™, over half (52%) chose confidence.

The increased confidence reported by alumnae also translates into high levels of political efficacy, with 86% of survey respondents agreeing with the statement, “I think that I could do as good a job in public office as most other people.”  Not only do they think that they can do as good a job; a majority of respondents (72%) report that they are at least considering running for office. 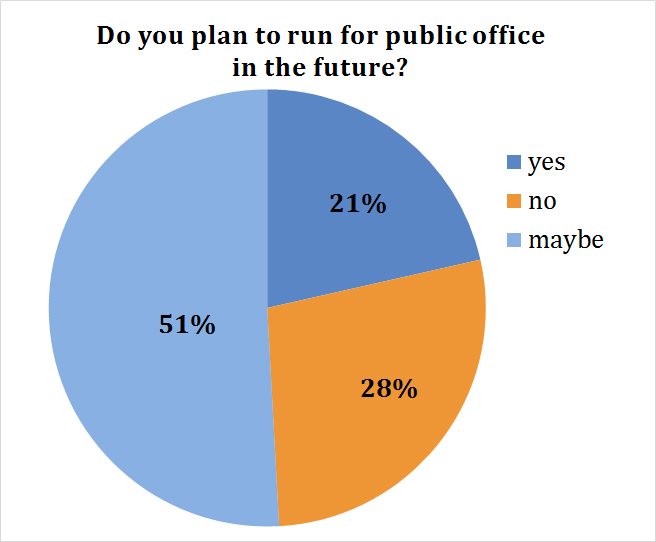 Leadership in a Diverse Nation

As the political and economic differences within our country become fodder for headlines and cause for gridlock in our nation’s capital, results from our survey show that NEW Leadership™ is developing a generation of leaders who recognize the need for cooperation and working across differences. During NEW Leadership™ participants get to know and work with women from different racial, religious, educational backgrounds and political viewpoints.  The survey included NEW Leadership™ participants from 18 programs across the country, and nearly half (45%) of the respondents are women of color.

A large majority of all respondents (88%) agreed with the statement, “Participating in NEW Leadership™ increased my ability to work with people whose views differ from my own.” 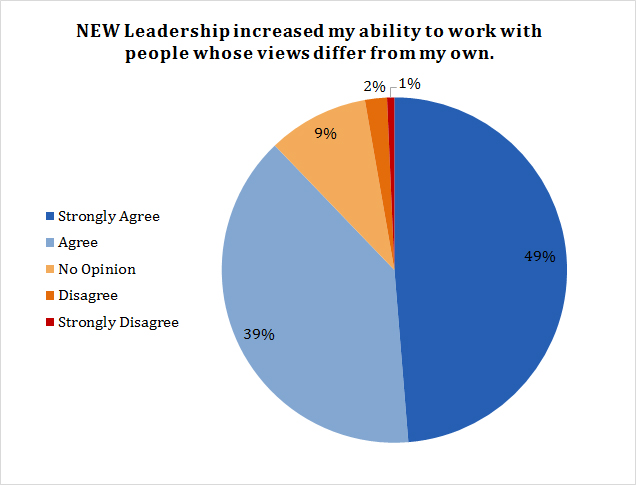 The importance of learning how to work with a diverse group was also reflected in the open ended responses: “The best thing I got from NEW Leadership™ was listening to so many success stories from women of virtually all backgrounds.”


Looking Toward the Future

Research shows that women often need to be encouraged to run for office, whereas men are more likely to say that the decision to run was entirely their idea. The significant increase in self-confidence and political efficacy reported by NEW Leadership™ alumnae can serve to counter the discouragement women often encounter when striving for leadership positions.  NEW Leadership™ particularly encourages women from at-risk populations and those whose perspectives have been largely absent in political leadership to become politically engaged.

The majority of NEW Leadership™ alumnae are still relatively young (80% of the respondents were under the age of 35), so it may be a while before we see the full effect of the program reflected in our elected political leaders. Nevertheless, as NEW Leadership™ alumnae come to understand the important role that politics plays in their lives and in their communities they are less likely to view themselves as outsiders to the political realm.

****
Methodological note: The survey was conducted online through Qualtrics between November 11, 2015 and February 29, 2016 with 818 NEW Leadership™ alumnae. Respondents had participated in one of 18 NEW Leadership™ programs between 1991 and 2015.