There are 312 statewide elected executive offices nationwide. Not all of these offices are up for election in 2016. This post reviews women’s presence among the candidates competing for the positions being contested this year.

There are only 12 states with gubernatorial elections this year, making it making it impossible to achieve any new records at this level. The record number of women filing for governor is 34, set in 1994 (18D, 15R, 1ACP).[1] No women filed in half of the states holding gubernatorial elections this year. Among those who did, women candidates earned party nominations for governor in only 2 states: incumbent Democratic Governor Kate Brown in Oregon and Democrat Sue Minter in Vermont. The record for women gubernatorial nominees is 10, set in 1994 (6D, 3R, 1ACP) and reached again in 1998 (6D, 4R), 2002 (9D, 1R), 2006 (5D, 5R) and 2010 (5D, 5R).

Women currently hold 75 (32D, 42R, 1NP), or 24%, of the 312 statewide elected executive offices nationwide, including 6 (3D, 3R) women governors. One incumbent woman governor, Maggie Hassan (D-NH), is running for the U.S. Senate this year. In order to maintain women’s current level of representation in gubernatorial offices, both female nominees will have to win their races this year. According to the Cook Political Report, Governor Kate Brown (D-OR) is likely to keep her seat. Sue Minter’s (D) contest in Vermont is rated as a “toss-up” in the final days before the election. It is certain that we will not see a record number of women governors in 2017. The record number of women serving as governor simultaneously is nine, achieved in 2004 and 2007. 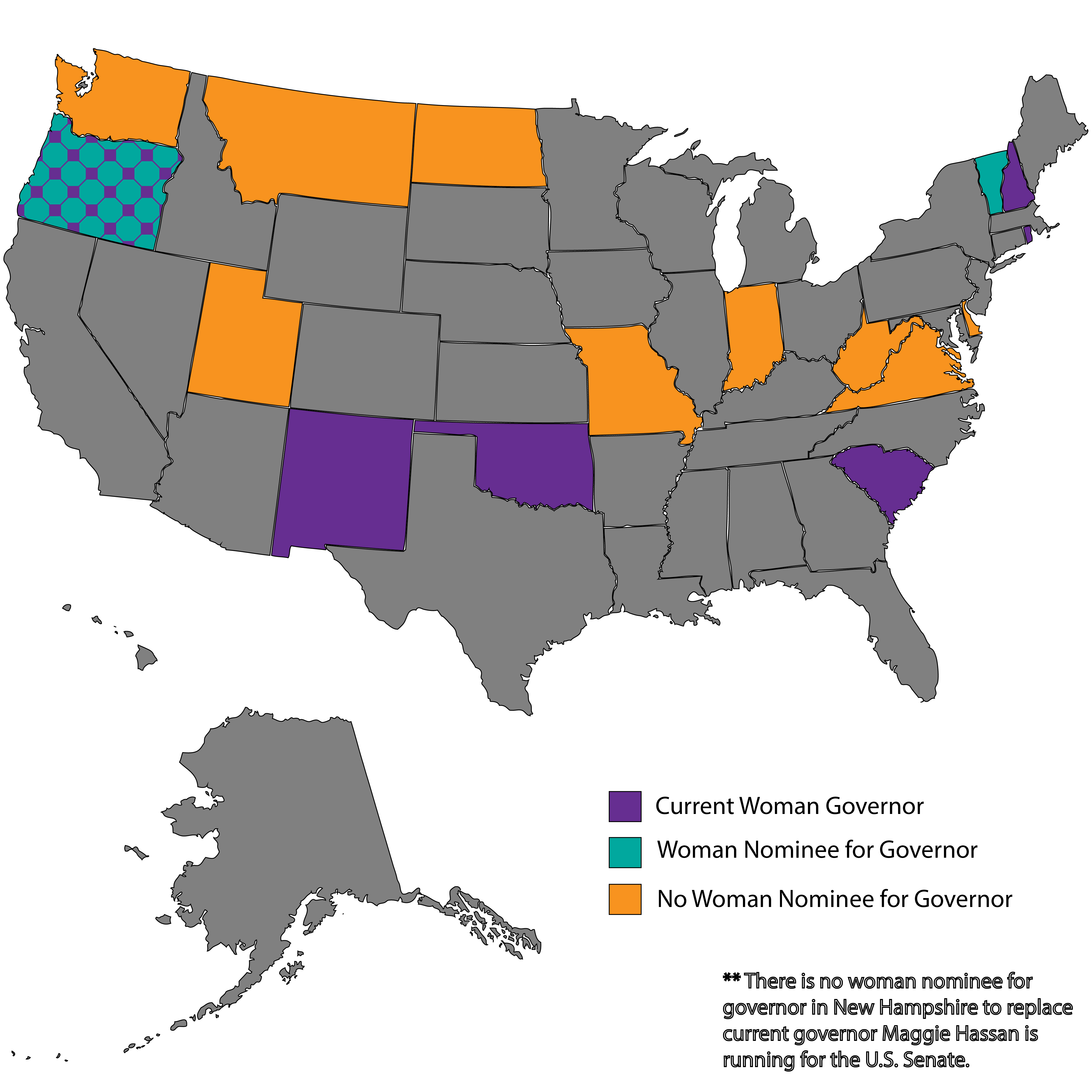 Twelve (4D, 8R) women currently serve as lieutenant governors. None are up for re-election this year. There will be a gain of at least one female lieutenant governor in 2017 because two women are competing against each other in Indiana. Democrat Bethany Hall-Long is also favored to win her bid for lieutenant governor of Delaware this year, as Democrats have held this seat since 1993.

Thirty-eight (13D, 25R) of the remaining 57 women currently serving in statewide elected executive office are not up for election in 2016, retaining their posts through 2017. At least one of those women may leave her post, however. California Attorney General Kamala Harris (D) is currently favored to win the U.S. Senate race in her state.

In addition to tracking the numbers of women winning statewide elected executive offices on Election Day, we will be watching these races where women have the potential to make history:

For the latest numbers and information about women running for office in 2016, visit CAWP’s Election Watch 2016. Election results will be posted as they are reported on CAWP’s website and social media.

[1] Women who are third party candidates are included if their parties have recently won statewide offices. ACP refers to “A Connecticut Party.”