What will the U.S. House of Representatives look like in 2017? Combining CAWP data with race ratings from the Cook Political Report reveals that women may well reach a new high in numerical representation in the 115th House, but that outcome relies upon favorable breaks in the most competitive races. Moreover, the most positive outcomes in 2016 are likely to come for Democratic women candidates, who are best situated to take new seats, while Republican women are likely to see a net loss in their ranks. 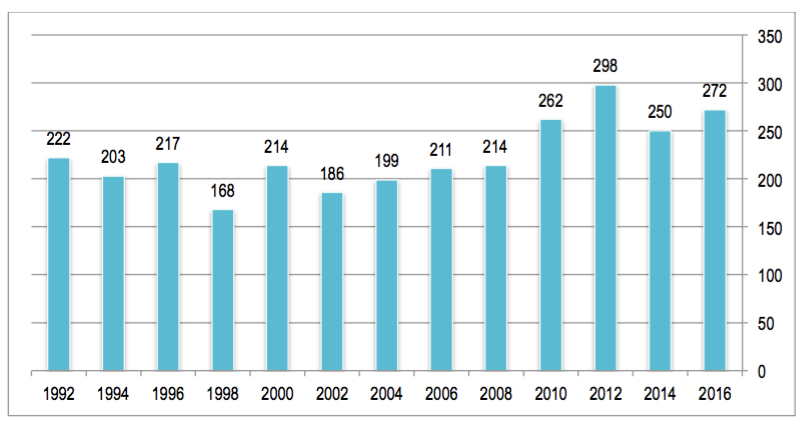 It’s important to look at the types of contests in which women are running to determine their likelihood of winning. In 2016, 19 (14D, 5R) women are nominees for open U.S. House seats, compared to the record high of 39 (26D, 13R) women running for open seats in 2012. As the charts below show, women have fallen short of making history as open seat nominees in either major party this year. Democrats have broken one record this year, exceeding the previous high of 118 total nominees for the U.S. House (set in 2012) by two. 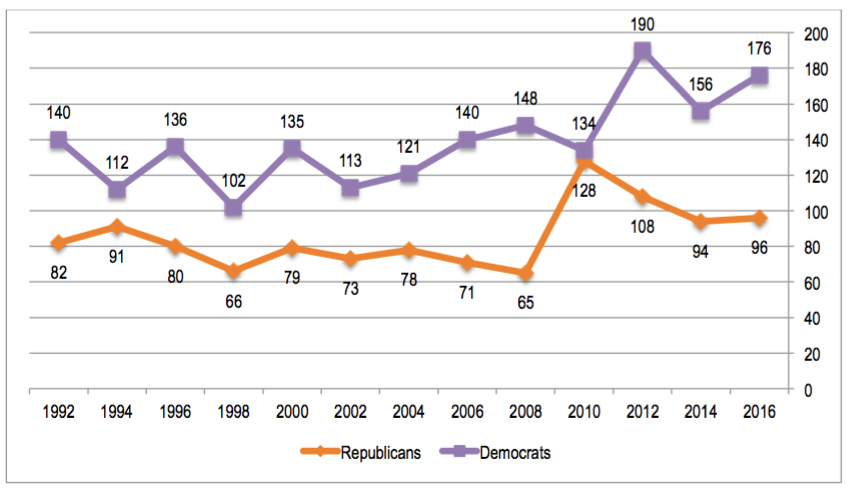 It is likely that the total number of women serving in the U.S. House will rise in the 115th Congress from the 84 women members (62D, 22R) in the 114th Congress, but the size of that increase depends on how the most contentious races of this cycle break for women candidates. Importantly, there is a partisan disparity in the prospects for women’s congressional success this year.

While we know that eleven current women members (8D, 3R) are leaving because of retirements, primary losses, and bids for other offices, four women candidates (3D, 1R) are very likely to become new members of the 115th Congress, based on the most recent ratings from the Cook Political Report. Democratic women candidates are much better represented among the remaining prospects for the 115th freshman class. Another two Democratic women newcomers (2D) are rated as likely or leaning to win House seats this year. Finally, 11 possible new women members (10D, 1R) are competing in contests rated as toss-ups by the Cook Political Report as of this week, with only one Republican among them. Two of these women are competing against each other in the competitive race for the open seat in New York’s 22nd district. There are currently no women incumbents in races deemed as toss-ups or possible losses, though Republicans Mia Love (R-UT) and Barbara Comstock (R-VA) are in the most vulnerable (labeled “lean Republican” by Cook) races this year. Based on these numbers, the number of Republican women in the U.S. House will almost certainly decline from the 114th to the 115th Congress; including a win in a toss-up race for Republican candidate Claudia Tenney (NY-22), Republican women are favored to win 21 seats this year, down from the 22 currently serving in the U.S. House.

Four (4D) of the five (4D, 1R) non-incumbent women most favored to win House seats (in races deemed safe or likely wins for their party by Cook Political Report) are women of color. In fact, of the five open-seat races with women candidates deemed as solid or likely for their party’s success, four are women of color. They include two Black women (Val Demings [FL-10] and Lisa Blunt Rochester [DE-At-large]) and two Asian American women (former Representative Colleen Hanabusa [HI-1] and Pramila Jayapal [WA-7]). Jayapal who would become the first Indian American woman ever elected to the U.S. Congress. The only other woman candidate equally favored to become a freshman member of the 115th Congress is Republican Liz Cheney, running for Wyoming’s at-large seat.

Women Members of the Freshman Class, U.S. House of Representatives, 1976-2014

In addition to tracking the numbers of women winning U.S. House seats on Election Day and closely monitoring the most competitive races with women running (see table above), we will be watching these races where women have the potential to make history:

Finally, while two states with no women currently serving in the U.S. House (Delaware and Iowa) have the potential to add women members to their 115th House delegations, Maryland, which currently has one woman House member and one woman Senator, is very likely to have no women in its congressional delegation come January 2017. Sixteen other states are unlikely to add women to their all-male U.S. House delegations in 2017: AK, AR, GA, ID, KY, LA, MS, MT, NE, ND, OK, PA, RI, SC, VT, and WV. Women are nominees in 8 of these 16 states, but they are all competing in races rated as solid or likely wins for the party of their opponent.