Earlier this week, a colleague was speaking to a community group about women in the 2012 elections and CAWP’s work to increase women’s political representation. The first question she was asked, in light of the tragedy that struck Newtown, Connecticut just days earlier, was what role women in office would play in the ensuing legislative debate over gun control. Where do the current female members of Congress stand on gun issues? And does the increased number of women in office make it more (or less) likely that anti-gun measures will pass? There are no concrete answers to these questions, as “gun control” encompasses myriad types of reforms and the women in congress do not represent a unified bloc on this or any issue.  But looking to history might be helpful to formulating hypotheses about what role women might play if gun control is, in fact, put on the legislative agenda. In 1994, Congress passed a ten-year assault weapons ban (AWB) under a title of the Violent Crime Control and Law Enforcement Act (HR 3355) by a vote of 235 to 195. At the time, there were 54 women in Congress – just 10% representation. Despite these numbers, women played a prominent role in the 1994 ban. Senator Dianne Feinstein (D-CA) was the architect and chief sponsor of the AWB and worked tirelessly to get enough votes to attach it to the Senate version of the crime bill. In the House, women were disproportionately represented among the members whipping the vote to be sure that the bill included the ban. 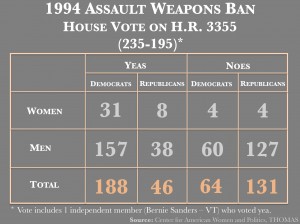 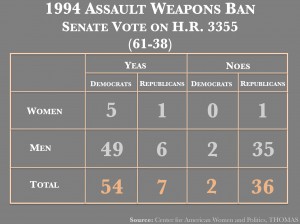 counterparts (see charts). Much has changed since 1994. Women have nearly doubled their representation in Congress – when the 113th Congress begins on January 3rd, women will take 18% (or 98) of the House and Senate seats. With that increase comes greater regional, racial, and ideological diversity among the women who serve. Probably most different is the increased conservatism among the Republican women who now serve, which may make it harder than it was 18 years ago to find bipartisan support for new restrictions on gun ownership. Because there have been so few gun control votes in recent years, one of the only indicators we have of potential support for such legislation is  National Rifle Association (NRA) ratings. Based on grades given to members of the 113th Congress, women represent a disproportionate percentage of the House (34%) and Senate (37%) members labeled as anti-gun by the NRA. However, the NRA grades all 20 Republican women in the House and 3 of 4 female Republican senators as strongly pro-gun; one female House Democrat and one Democratic woman in the Senate are also given “A” grades by the gun lobby. The context (post-Newtown) and content (e.g. only targeting assault weapons) of any pending legislative debate matters and may yield votes that do not mirror these particular ratings, but only time will tell. What we do know for now is that Senator Feinstein has vowed to re-introduce an updated assault weapons ban when the congressional session opens in January and, if history is any guide, will fight furiously to garner support in both chambers. Some pro-gun members have already said they would be open to restrictions on military-grade weapons, and House Democrat Carolyn McCarthy (NY), a long-time anti-gun advocate, has vowed she will give “full force” to reform efforts and will “embarrass” President Obama if he does not stay true to his promise of policy change. It’s no surprise that these two women will be leading the charge to respond to recent gun tragedies. Both women know intimately the horrors of gun violence and have used personal tragedies to fuel policy priorities. Moreover, they represent constituencies beyond their geographic borders, speaking on behalf of women in the electorate who – based on yesterday’s Pew Poll - are significantly more likely than men to prioritize gun control over gun rights. It will take both men and women at all levels to change our nation’s policies around guns, and having more women in Congress does not guarantee movement in either direction – holding firm on rights or putting more restrictions in place. But, women – as politicians, advocates, and citizens - will be essential players in this national debate.

Welcome to footnotes, CAWP’s latest effort to bring you new, interesting, and timely information about women and politics. Since 1971, the Center for American Women and Politics has been the leading source of scholarly research and current data about American women’s political participation. We’ve learned a lot in the last 40 years and look forward to asking and answering more questions essential to increasing women’s political power in the decades to come. footnotes will give us the space and opportunity to do just that, and we’ll do it with your help. What will we write about? As the keepers of current data on women candidates, women voters, and women officeholders, CAWP has an abundance of information that can be easily missed on our website or, even more, in the footnotes of our research reports and fact sheets. This site will highlight interesting pieces and analyses of our existing data, as well as new data collected to answer questions that arise out of recent headlines, the political climate, or the latest scholarship. In addition to original data and analyses, footnotes will feature responses by CAWP scholars and staff to news and events related to women and politics. Finally, we hope that this blog will provide a forum to highlight academic research on gender and politics for scholars, practitioners, and advocates alike. How can you help? This blog will give us the opportunity to share more information with you, so we hope you will subscribe to our RSS feed and/or be sure to follow us on Twitter and Facebook. But footnotes is not just a forum for CAWP staff and scholars. We’d like to hear your comments, your ideas, and your questions about women’s political participation. Let’s start a dialogue here that helps to identify and address the reasons for women’s political underrepresentation and promotes the advancement of women’s influence and leadership in public life.