This week, the Center for American Women and Politics and Higher Heights released The Status of Black Women in American Politics, a report that takes a snapshot of Black women’s current political representation and participation and reflects back on the historical advancement of Black women as voters, candidates, and elected and appointed officials. This report identifies and outlines the problem of Black women’s underrepresentation and serves as a call to action for citizens, advocates, potential candidates, and those in political power. I wrote this report over multiple 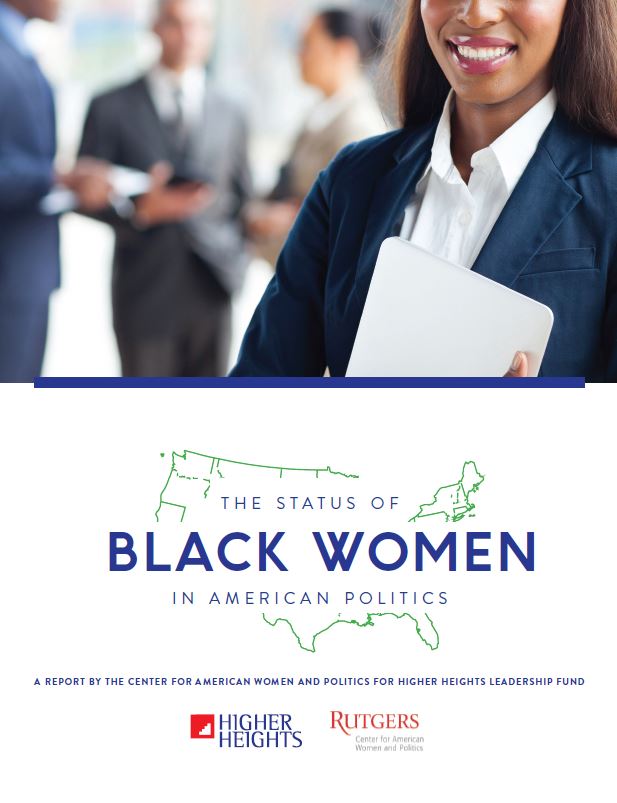 months, poring through CAWP’s databases of women candidates and elected officials and gathering new data on Black women and men in politics to provide the most comprehensive possible analysis. . Throughout these months, I – a scholar of women and politics accustomed to the significant gender disparities in political power – was continually surprised by the dearth of Black women in elected office at all levels and throughout our states and cities. I was shocked when I realized that Black women have represented fewer than 30 different congressional districts in only 13 states in all of U.S. history and disturbed that I could count the number of Black women who have ever served in statewide elected executive offices on two hands. I was even more taken aback upon noting that 77% of the Black women who have served in Congress and 9 of the 10 Black women who have been elected to statewide executive offices have entered office since 1993. While these data make evident the delay in Black women’s political advancement, this recent history of representational growth demonstrates enormous opportunities for continued progress and power. To ensure that progress, organizations like Higher Heights are working to build a stronger infrastructure of support for Black women candidates and urging Black women to harness their power at the ballot box --  not only to amplify their own political voices, but also to support (and become) the much-needed Black women officeholders. The research proves that advancing Black women’s representation is not only a matter of democratic fairness, but influences policy agendas and debates, as well as the political engagement of underrepresented constituencies. There is much more work to do to in harnessing Black women’s political power, but this report provides an important foundation upon which to foster dialogue and identify opportunities for growth. Why? Because numbers matter. Numbers validate perceptions of inequality. Numbers illuminate the sites for and extent of those disparities. Numbers demonstrate how much work we have left to do. Finally, numbers are power in making the case for change. Take a few minutes to arm yourself with the numbers that resonate most for you from our report. Then please share them with your networks to help us continue the conversation that we began Thursday on harnessing the political power of Black women. On social media, use the hashtag #BlackWomenLead.
Candidacy
Congress
History
Leadership
Race
Black women
Intersectionality