The Representation of Women of Color among 2018 Candidates 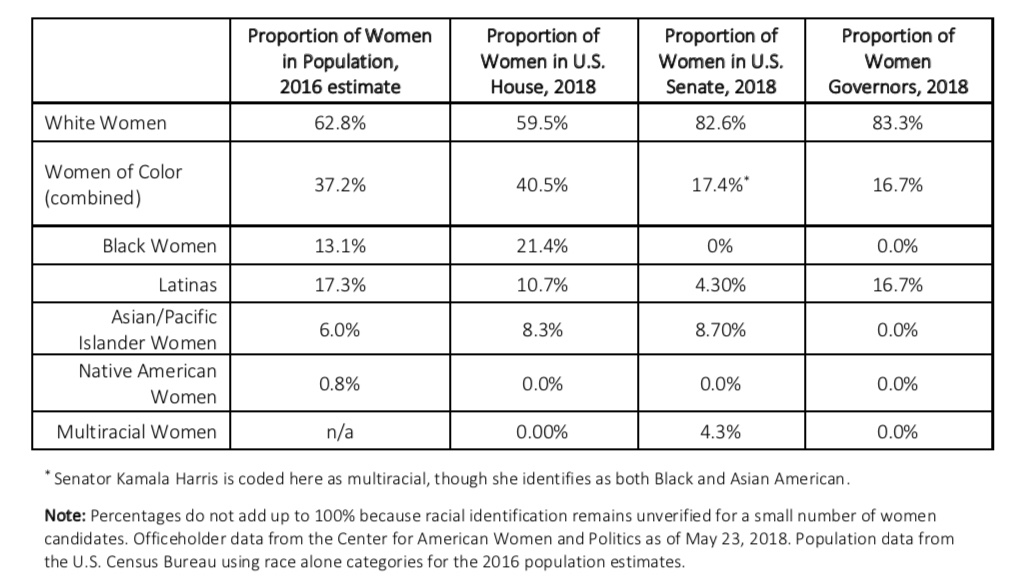 Will the 2018 election change these numbers? It’s too early to make accurate predictions of success in November, but we have our first cut at the racial and ethnic diversity in this year’s congressional and gubernatorial candidate pool. The data reflect trends similar to gender and racial disparities among officeholders:

In early results, our data show that the success rates of women primary candidates vary by race and office. Of particular note, black and white women have the highest win rates thus far in U.S. House races and women of color are 3 of 4 gubernatorial nominees selected as of May 23.

We break down the data (as of May 23, 2018) by level of office below, accounting for the diversity among major party women candidates of different racial groups as well as the types of races in which they are competing. These data include women who have already lost their primaries in order to count them among all of the women who have run for office this year. Our count of total candidates also includes a small number of women for whom we have no racial identification.[i]

Proportion of All Women Candidates for the U.S. House

In 13 primaries to date, 43.4% of women of color won nominations in U.S. House contests. 36.2% of women of color non-incumbents won major party House nominations. Black women have the highest win rate overall when incumbents are included; 55.6% of Black women candidates have secured nominations compared to 48% of White women, for example. Among non-incumbents, however, the win rate for black and white women is the same at 42.9% and lower for Latinas, asian/pacific islander, and multiracial women. 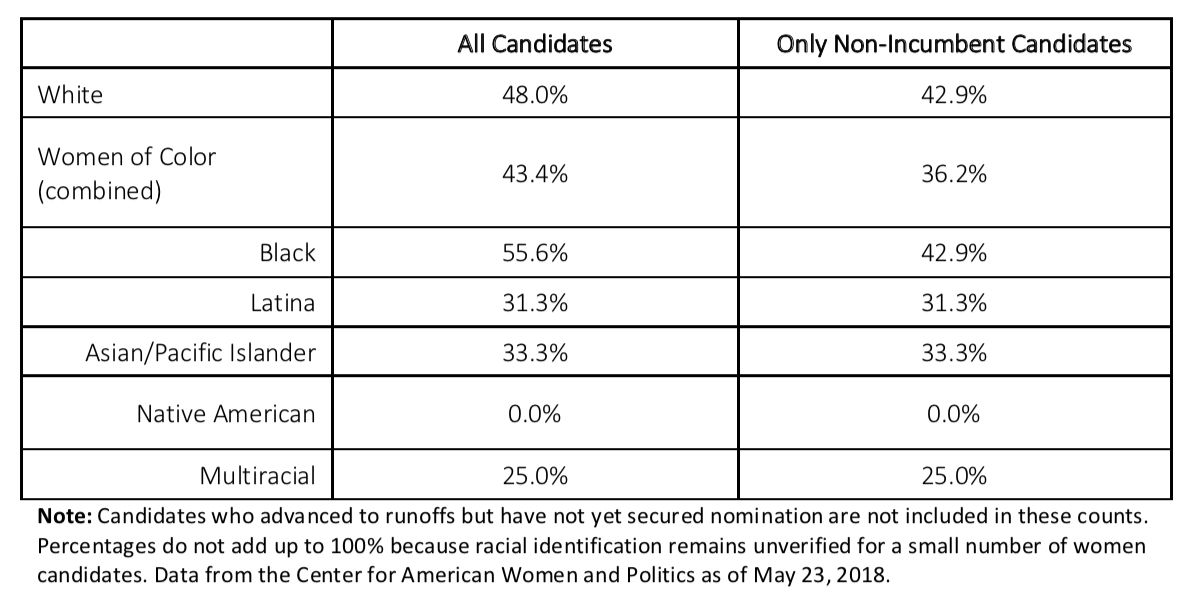 Women of color are 17.4%  of women members of the U.S. Senate today. They are 25% of all 36 major party women candidates who have filed to run for the U.S. Senate this year (across the 36 states where filing deadlines have passed).

Proportion of All Women Candidates for the U.S. Senate

In 13 primaries to date, none of the three women of color candidates for the U.S. Senate were successful.  Of the 4 White women who have competed in Senate primaries thus far, 2 – including incumbent Deb Fischer (R-NE) – have secured nominations.

Just 1 of 6 current women governors (16.7%) is a woman of color: Susana Martinez (R-NM). Women of color are 25.5% of all 47 major party women candidates who have filed for governor this year in the 24 states where filing deadlines for gubernatorial contests have passed.

Proportion of All Women Candidates for Governor

White women are 83.3% of women governors today and 70.2% of all women candidates who have already filed to run for governor this year.  Of the 4 (2D, 2R) incumbent women governors running for re-election this year, all are white.

Success Rates for Women Candidates for Governor (as of May 23, 2018)

In the 9 gubernatorial primaries to date, 3 of 5 (60%) women of color candidates won nominations for governor, all non-incumbents. Of the 10 White women on gubernatorial ballots to date, just one – incumbent Governor Kate Brown (D-OR) – was successful.

To monitor women's candidacies throughout election 2018, see CAWP's Election Watch page and watch for additional analyses at Gender Watch 2018, a project of CAWP and the Barbara Lee Family Foundation.