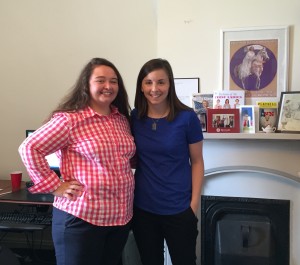 This week, CAWP was lucky to have extern Alexandra Banash join us from Aquinas College in Grand Rapids, MI. Working with a fellow Aquinas Saint, CAWP Scholar Kelly Dittmar, Alexandra learned about CAWP’s work and helped conduct CAWP research. As the week came to an end, Kelly and Alexandra had a short conversation about some of the topics that came up throughout the week, and shared their cross-generational insights below.

AB:I have been interested in politics itself from a very young age. We could say I have then also been interested in women in politics from a young age because of the active participation of women that I have been surrounded by my entire life. I delved into the subject of women and politics as an undergrad at Aquinas College in Grand Rapids, MI. As a junior I enrolled in an entry-level women’s studies course. I don’t think from that point on there was a time that I became detached from love of the topic. With that being said, I was interested in coming to CAWP this summer when the chair of the women’s studies department encouraged me to apply for a pilot program. In doing so I had no idea that I was coming to CAWP. Not knowing much about CAWP and not knowing I was coming to CAWP was a curse and a blessing because after my time here I don’t want to leave.

AB: Even if we had equal numbers of men and women on the ballot, do you think that their will ever be a 50/50 distribution between men and women in office?

KD:One of the biggest, and initial, hurdles to political parity is the dearth of female candidates. We know that women women run, women win as much as men in comparable races. In other words, there does not appear to be any blatant bias at the ballot box. However, women make up far less than 50% of candidates for office at all levels, lessening their chances of being on the ballot or being elected to office. There is a great deal of research into whywomen don’t run, as well as efforts by women’s political organizations to encourage, recruit, and support women candidates (CAWP’s Ready to Run is a great example!). I’m confident that if the number of women candidates rose significantly, we would see a quicker move to political parity. But that alone won’t resolve some of the underlying institutional barriers to women’s political power. That will take more significant cultural changes, like redefining and revisioning what it means to be an elected official so that masculinity and men are not assumed the norm and femininity and women assumed as “other.” Rethinking and revising our stereotypical expectations of gender, candidacy, and officeholders is the harder resolution on the road to 50/50, and is one that will both create greater opportunities for women to run and be influenced by women running and serving. I can’t venture to guess whenwe will reach gender parity in office since we’ve seen such a plateau (and some declines) in recent decades, but I do hope we get there – even if that means I am out of a job someday. 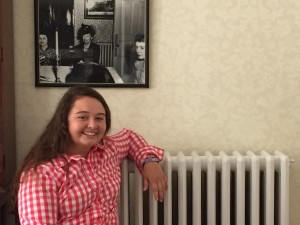 KD:This week, you helped analyze data related to Black women’s political representation and engaged in conversations about gender dynamics in the 2016 presidential race. You also learned a bit more about what we do at CAWP. What have you found most interesting or surprising, and why?

AB: Looking at the data overall I am shocked by the numbers that analyze the amount of women in statewide elected executive offices by state. Just 25% of statewide elected executive officials are women and only two of those are Black women. The disparity between the numbers of Black women in office and Black women in the population in some states is almost unfathomable. Looking at state legislative representation, I am alarmed by the fact that only 3.4 percent of all state legislators nationwide are Black women in 2015. I do not expect to see a large increase in 2016, which is very unfortunate. When will this change?

AB:  What do you think is the best tool for successful support as a woman when deciding to run for office whether it is on the local, state, or federal level?

KD:We know from research that women make the decision to run differently than men, and support and encouragement is even more essential for them than for men. However, it’s too simple to say that we need to just “ask women to run.” In addition to asking, or encouraging women, to consider a bid for office, we need to provide them the incentive, infrastructure, and roadmap to run successfully. Having the support of political leaders – whether elected officials, formerly elected officials, or party leaders – is often most influential to women’s calculus. If that support is not there, especially from parties (which, according to research, can act as gatekeepers to women’s political power), it’s important for women to be able to look to an alternative support infrastructure. That might include women’s political organizations, personal support networks, or community groups that will back a woman candidate from the time she makes the decision to run until Election Day. Running for office is not easy at any level and women are smart – they need to know that: (1) they can win; (2) there are people behind them; and (3) there are groups or individuals that will help them navigate political terrain successfully. 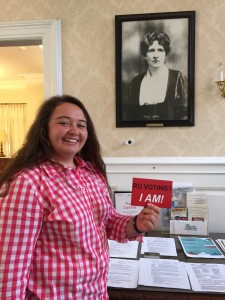 KD:Recent research on young people’s political ambition finds a gender gap in young men and women’s interest in running for office (with women less likely to want to run). It also finds that women’s confidence in their leadership skills actually declinesin college. Based on your knowledge and experiences, what do you think might be happening? What do you think we can do about it?

AB:The decrease in confidence for women in college might be tied to the limited scope of who is in power today. The rigid two-party system constrains the expansion of opportunity for groups that are marginalized from power. Today, women are a group marginalized from power, which is correlated with the rigid gender binary in society where men have control power relations. The large gap of women to men in our legislative body affects the experiences in our everyday lives. How can we as women become so confident if we don’t have other women behind us? As Shirley Chisholm would say, “My success was exclusively due to the support of women,” adding, “No one will save us but us.”

AB:Transitioning from a small liberal arts school to a large university, can you compare and contrast the power of the students from a political stand point and how does it influence the decisions of the hierarchy of the administration of the school(s)?

KD:Even more than contrasting the power of students at small or large higher education institutions, I think it is important to emphasize the political power students have, but often do not use. Whether it be with their university administration or their member of Congress, students can mobilize to have a great deal of influence. As consumers (at a college or university) and constituents, students are affected directly by the decisions made by leaders in both realms. Like any population, students often struggle to find the time or incentive (or even information needed) to navigate the bureaucracy of government or higher education. I think the key for students across the board is to see themselves as their own best advocates and not count on others to represent their interests. Just like women need a seat at the table, students’ voices need to be heard in the most important policy debates of the day – all of which affect their presents and futures. 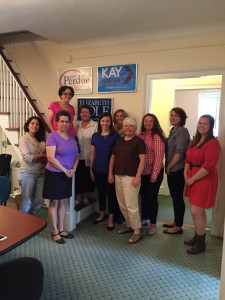 KD:There is a chance that we might elect a woman president in 2016. Do you think it will happen? Do you think it matters to have a woman in the White House? Why/why not?

AB:Yes, there is a chance, but I do not believe it will happen. Of course, I would be so ecstatic to even see a woman be the leading candidate on the Republican or Democratic ticket, but we need to see if the level of support is there and we need to see if people get out and vote. Voting is the key; if we can somehow reach out to the people that would most heavily influence and be influenced by a women being in office, I think the vote could change drastically. On that note, I do think it matters to have women in office. In looking at recent data, we have seen a common progression in the ups and downs of the economy, but there has not been any change in who is regulating the economy per se. I also think it is important to note that having women in office would also change the dynamic of the household, shifting roles and making it more of a common solution for women to be in public and private sphere.

KD: Of all of the CAWP staff you have met this week, who is your favorite and why?

AB: Of all of the CAWP staff I have met this week, I would have to say Florence Eagleton (1870-1956; pictured to the right with Alexandra) would have to be my favorite [NOTE: Eagleton is the namesake of the Eagleton institute, not a former or current member of the CAWP staff.] She once said in donating the building that houses CAWP and Eagleton that the purposes should be for, “the development of and education for responsible leadership in civic and governmental affairs and the solution of their political problems.”  We have a lot of problems. Somehow we have to fix them.