Today we are focusing on the outlook for women running in U.S. Senate races this year. Neither Senate nor House races feature record numbers of women candidates or nominees this cycle, but we may see a net increase in the number of women serving in the U.S. Senate in January 2015. Much depends on how some of the most competitive Senate races of this cycle break next Tuesday. Candidates and Nominees 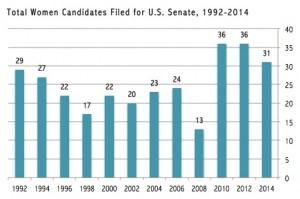 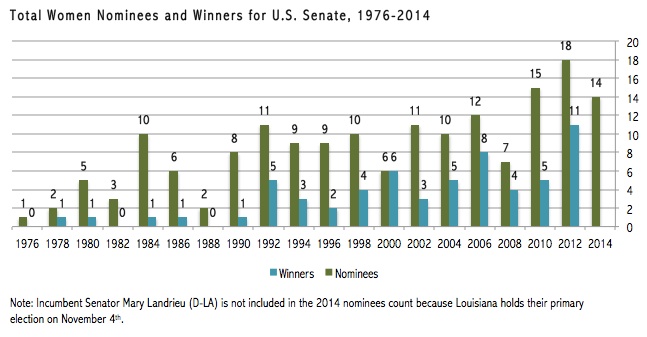 It’s important to look at the types of contests in which women are running to determine their likelihood of winning. In 2014, 7 (4D, 3R) women are nominees for open U.S. Senate seats, compared to the 8 (4D, 4R) women running for open seats in 2012. As the charts below show, women have fallen short of making history as candidates, nominees, or open seat nominees in either major political party this year. This is the first election since 1992 in which more Republican women than Democratic women filed for U.S. Senate seats, but more Democratic women made it through their primaries to become Senate nominees. 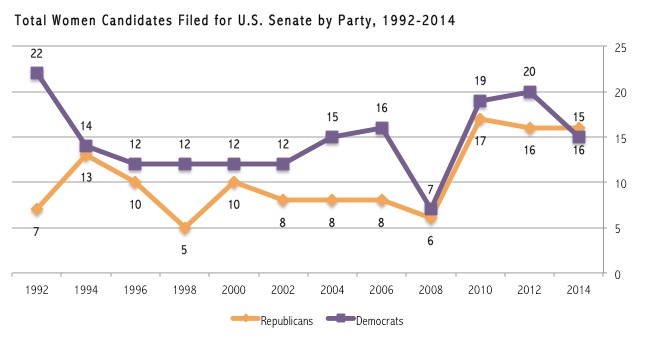 Women in the 114th Congress Twenty (16D, 4R) women currently serve in the U.S. Senate. There are no incumbent women senators stepping down this year, and four (3D, 1R) incumbent women are up for re-election. Sixteen (13D, 3R) incumbent women senators are holdovers who will  remain in office through the 114th Congress. Based on the most recent ratings, two more women are very likely to win their Senate races next Tuesday: incumbent Senator Susan Collins (R-ME) and Representative Shelley Moore Capito (R-WV), who is running for an open seat against another female candidate, Secretary of State Natalie Tennant (D-WV). Six (5D, 1R) more women candidates for the U.S. Senate are in contests rated as toss-ups by the Cook Political Report, including incumbents Mary Landrieu (D-LA), Kay Hagen (D-NC), and Jeanne Shaheen (D-NH). Two women, Michelle Nunn (D-GA) and Joni Ernst (R-IA), are running competitively for open seats, and Alison Lundergan Grimes (D-KY) is challenging incumbent Mitch McConnell in Kentucky’s contentious Senate contest. Thus women are major party nominees in many of the races that will determine the partisan balance of power in the U.S. Senate, including six of the ten toss-up contests identified by Cook.

Only two women of color, Connie Johnson (D-OK) and Joyce Dickerson (D-SC), are major party Senate nominees this year, and both are unlikely to win their races, leaving Senator Mazie Hirono (D-HI) as the only woman of color in the U.S. Senate in the 114th Congress. In 2012, a record 5 (4D, 1R) new women were elected to the U.S. Senate. We are unlikely to exceed that number of new women winning this year. What to Watch on Election Day In addition to tracking the numbers of women winning U.S. Senate seats on Election Day and closely monitoring the most competitive races with women running (see table above), we will be watching these races where women have the potential to make history:

On a less positive note, no more than one incumbent woman Senator has ever lost her re-election in any previous election year. However, three female incumbents are in races considered toss-ups this year. For the latest numbers and information about women running for office in 2014, visit CAWP’s Election Watch 2014 and check out our next post on women running for governor this year. You can also follow the conversation on Facebook and Twitter by using the hashtag #WomenRun2014.

Kelly Dittmar is an Assistant Professor of Political Science at Rutgers–Camden and Scholar at the Center for American Women and Politics at the Eagleton Institute of Politics.  She is the co-author of A Seat at the Table: Congresswomen’s Perspectives on Why Their Representation Matters (Oxford University Press, 2018) (with Kira Sanbonmatsu and Susan J. Carroll) and author of Navigating Gendered Terrain: Stereotypes and Strategy in Political Campaigns (Temple University Press, 2015).