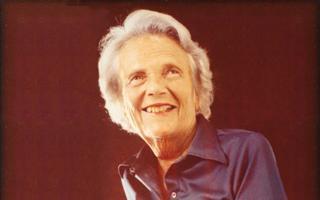 A distinguished Republican political leader in New Jersey, Ms. Neuberger was appointed to three terms on the New Jersey Board of Higher Education, sat on the State Board of Education, and was a member of the Republican National Committee. Her Fund will support Rutgers undergraduates with an interest in women’s political leadership interning in the government/public service/non-profit sectors in Washington, DC. Susan N. Wilson established this Fund to honor her mother.

Katherine Kridel was born in New York City on April 30, 1907. She earned a B.S. from Barnard College, Columbia University in 1927 and did three years of graduate studies in political science and sociology at Columbia. In 1929 Ms. Kridel married Harry Hobson Neuberger. The couple settled in Middletown, New Jersey, raised two daughters, Susan and Joan, and had six grandchildren.

Over the course of more than forty years, Ms. Neuberger chaired and served on numerous boards and commissions dedicated to higher education, corrections, social services and politics. Ms. Neuberger was an original member of the advisory board that helped establish the Center for American Women and Politics (CAWP) in 1971. Known for her candor and diligence in rooting out government waste and corruption, Ms. Neuberger was appointed to three terms on the New Jersey Board of Higher Education. She also sat on the State Board of Education and was a member of the Republican National Committee.

Ms. Neuberger was awarded honorary degrees from Montclair State College, Monmouth College, Jersey City State College and Fairleigh Dickenson University.  In 1979 Rutgers University President Edward J. Bloustein awarded Ms. Neuberger an honorary doctorate.  In bestowing the award he said of Ms. Neuberger, “Few in this or any State can equal your forty-year record of selfless public service in penal reform, law enforcement, and higher education. As an authority and consultant on the problems women face in penal institutions, as a member and as Chairman of the New Jersey Board of Higher Education, as trustee and friend of colleges and universities, and as a leader in public life, you have unselfishly given of your talents as an administrator, advocate, and advisor to your community, this State and to the nation.”

It is daunting to write about my mother, Katherine Alma Kridel Neuberger, or K. K. or Kay, as she was more familiarly known. Why wouldn’t it be when Thomas H. Kean, then the governor of New Jersey, said this about her shortly after she died on October 15, 1982:

Mrs. Neuberger spent her lifetime serving the people of the state in political, professional, civic and charitable causes. Her untiring efforts in behalf of her fellow citizens established a standard of service and compassion, which shall remain unsurpassed. All of us who knew her will miss her charm and her sense of concern for others. The people of New Jersey, whom she served so well, shall miss her. Her death is a very deep personal loss to me and to the State of New Jersey.

From the vantage point of 86-years looking back at my mother and her career, I realize that I was the first recipient of the Katherine K. Neuberger internship. My mother never stopped teaching me about politics and the importance of everyone’s participation in it. She loved Election Day more than her birthday, Christmas, or even the Fourth of July: “It is the day, when if everyone votes, we are all equal,” she would say to me quite frequently.

It is my hope that future recipients of the Katherine K. Neuberger Internship will share some of her passion for the possibilities of politics and will show the courage that she had to speak out boldly on the most controversial of issues to ensure all Americans a better future.

To donate to the Katherine K. Neuberger Legacy Fund, please contact Sue Nemeth at (848) 932-8593 or gsnemeth@eagleton.rutgers.edu.