Phyllis Kornicker, a retired businesswoman and civic leader, left a $500,000 bequest to CAWP for a legacy fund to “encourage women to become actively involved in the political life of America.” The gift supports CAWP programs that motivate and prepare women to participate in politics.

Phyllis Kornicker, a retired businesswoman and civic leader, left a $500,000 bequest to CAWP for a legacy fund to “encourage women to become actively involved in the political life of America.” The gift will support CAWP programs that motivate and prepare women to participate in politics.
(Press release available here.)

Kornicker’s vision and generosity will support a variety of CAWP education and outreach programs aimed at channeling more women into politics and public leadership. The first program to benefit will be The 2012 Project, a national campaign designed to urge accomplished women to take advantage of the once-a-decade opportunities created by redistricting in the 2012 elections. CAWP is promoting formation of statewide coalitions under The 2012 Project banner to recruit women to run for state legislatures and Congress.

“Phyllis's spirit will inspire us as we extend our programs across the country," said Ruth B. Mandel, director of the Eagleton Institute of Politics. “We miss her vibrant presence at public programs. Phyllis could always be counted on to speak her mind and ask thought-provoking questions.”

After the 2012 elections, the fund will advance the Center’s ongoing efforts to institutionalize women’s leadership education and training in dozens of states. CAWP already has a national track record, with more than 30 state-based programs modeled on the Center’s Ready to Run®campaign training and NEW Leadership™ program for college women, and more starting every year.

“It was a treat to have Phyllis engaged in our programs for several years,” recalled Kathy Kleeman, Eagleton’s senior communications officer, who introduced Kornicker to the Center’s work while delivering a speech at The Ponds in Monroe, NJ, where Kornicker lived. “She rarely missed the opportunity to connect with students at the NEW Leadership™ keynote event or mingle with candidates at Ready to Run™.”

Phyllis (Passman) Kornicker was born in Johnstown, PA and raised in New York City, where she graduated from Abraham Lincoln High School. Married for almost 50 years to Maxwell Kornicker, she worked in the New York jewelry trade, first in sales and then in accounting. Later she joined Ceramco, Inc., a dental porcelain company in Long Island City, where she became accounts payable and credit manager. The couple relocated to East Windsor, NJ, in the early 1970's when Ceramco was purchased by Johnson & Johnson Dental Products Company, and Phyllis became the credit and receivables manager for both companies. She retired from J&J after 23 years of service. After her husband passed away in 1994, Phyllis moved to The Ponds. She is survived by a cousin, Mary Ellen Brodsky Goldberg. 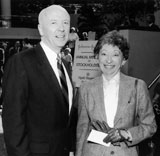 Kornicker’s political interest began when she volunteered for the presidential campaign of John F. Kennedy and continued unabated throughout the rest of her life. She was also involved for many years in women’s organizations, serving twice as Worthy Matron in the Order of the Eastern Star on Long Island. While living in Monroe, she served as president of the Princeton Chapter of Business & Professional Women of New Jersey and regional president for the New Jersey - Brandeis National Committee, earning a National President's Commendation from the University’s president. She was also a founding member and president of The Ponds Chapter of The Brandeis National Committee. She chaired special events for the Monroe Township League of Women Voters and was active in East Windsor Hadassah, receiving the organization’s Member of the Year, Woman of Valor Award, and the National Leadership Award. She was also a member of the Monroe Township Democratic Party. In all of her activities, she placed priority on mentoring women.

Kornicker’s friend, Christine Cook, remembers her fondly as someone who “lit up a room with her sharp wit, enthusiasm for learning, and zest for life.” Friends recall her as the embodiment of the active senior, whether enjoying a trip to the theater, organizing a book club, or engaging in a heated political discussion at a CAWP event.

“Never content with the status quo, Phyllis believed in women’s potential to build a better future and strengthen our democracy,” says CAWP director Debbie Walsh. “We are honored that she entrusted us with her dream of spurring more women to seek political leadership.”