New Jersey’s Senate Majority Leader Loretta Weinberg wants her legacy to be “a whole generation of troublemakers” following her footsteps into politics.

New Jersey’s Senate Majority Leader Loretta Weinberg wants her legacy to be “a whole generation of troublemakers” following her footsteps into politics. Weinberg, elected to the State Senate in 2005 after 14 years in the Assembly, recently celebrated her 80th birthday by inviting friends to contribute to an endowed Legacy Fund in her name at CAWP to engage and inspire more women to participate in politics and government.

I have been privileged to serve in public life, the place where we as women can really make a difference for our families. We can make sure that we have appropriate medical care after giving birth to babies; we can work to make sure our children grow up with clean air to breathe and with a decent public education. Where else can one serve to really make that ripple in the water that might even change oceans? It's an interesting, exciting, frustrating, challenging, sometimes annoying, but very fulfilling way to pursue our dreams for the future. I hope this Legacy fund will help other women find this same path. Loretta Leone Isaacs Weinberg

Loretta Weinberg was elected to the New Jersey State Senate (District 37) in November 2005. She is currently the Senate majority leader and also serves on the Senate Judiciary Committee.

The Politics of Courage — Senator Loretta Weinberg shares her personal motivations for leadership and her crowning achievements in public office during her keynote address at NEW Leadership™ New Jersey 2017.

Senator Weinberg was the first person to run as a Democratic candidate for lieutenant governor in the State of New Jersey. Prior to joining the State Senate, she served in the New Jersey General Assembly for 14 years. In 2004, after 10 years of work, Senator Weinberg’s .08 Legislation, which lowers the legal alcohol level to .08 in New Jersey, was signed into law. She sponsored the New Jersey Smoke-Free Air Act, which prohibits smoking in indoor public places and workplaces. She has also sponsored legislation that: overhauled the jury selection process; required health insurance companies to pay for at least 48 hours of hospital care for new mothers and their babies; created the Governor's Advisory Council on Adolescent Pregnancy; and shaped a landmark autism research funding bill that gives $1.00 from every New Jersey traffic violation to autism research, which is projected to yield $20 million toward autism research within five years. Weinberg has been in the lead on every LGBT advancement in New Jersey throughout her legislative career, including marriage equality, transgender equality, and sweeping anti-discrimination and anti-hate crimes laws. She has also been instrumental in expanding awareness of aphasia, introducing a bill to designate June as Aphasia Month in New Jersey and sponsoring legislation that formed an Aphasia Study Commission.

Throughout her career in public service, Senator Weinberg has devoted many hours to her community and to local, statewide, and national organizations that seek to improve the lives of men, women, and children. She has been active in Shelter Our Sisters (Founding Member), the Bergen Family Center, the New Jersey Network of Women Elected Officials, the National Organization of Women Legislators, and the National Council of Jewish Women (Life Member). She is a long-time member of Temple Emeth in Teaneck. 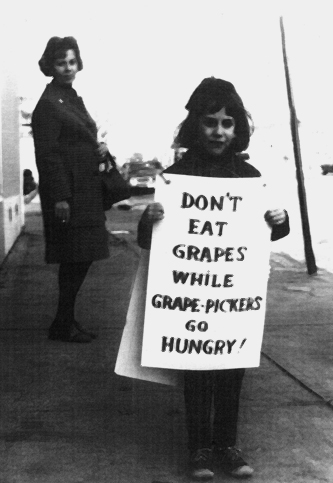 I was six years old when my mother first took me to the supermarket, and put a big placard over my head.  People entering the market looked at my sign, which read “Don’t Eat Grapes While Grape Pickers Go Hungry.” As I was walking back and forth I finally understood what we were doing there.  I walked over to my mom who was delivering her political rhetoric to some unsuspecting shopper.  “Mommy,” I said tugging on her dress still wearing the billboard “Is this Pick-et-ting?”  Yes, she said,  imitating my little girl voice. “This is Pick-et-ting.”  Could Cesar Chavez have known the impact he was having on middle class suburban housewives?  To this day I still look at grapes with a certain degree of suspicion.
Francine Weinberg Graff