Susan N. Wilson, M.S.Ed., served as the executive director of the Network for Family Life Education at Rutgers for 23 years. Her Legacy Fund has endowed NEW Leadership® New Jersey, CAWP's flagship summer institute for college women. In 2019, the program was named in her honor.

Susan N. Wilson, M.S.Ed., served for 23 years as the executive director of the Network for Family Life Education established in 1981 as a companion program of the New Jersey Network on Adolescent Pregnancy at the Rutgers School of Social Work. In 2005, the program’s name was changed to Answer. Now an award-winning, national organization, providing sexuality education resources to millions of young people and adults, Answer is part of the Graduate School of Applied and Professional Psychology (GSAPP). Wilson’s legacy giving to Rutgers included major program support for Answer.

A state and national leader in the fight for effective sexuality/family life education and prevention of adolescent pregnancy, Wilson planned and managed the operations of a resource, advocacy and technical assistance organization committed to introducing and improving family life and sexuality education programs in public schools and community agencies, particularly in New Jersey. She found what became a lifelong purpose after she was appointed to the New Jersey State Board of Education by Governor Brendan T. Byrne. There, she served a single five-year term and became vice president and chair of the Law Committee. However, it was her leadership of and advocacy for the effort to require family life and sexuality education in public schools which focused her energies and enemies. Although the policy remains in place today, Wilson lost her seat on the board.

She served as the first chair of the New Jersey’s Advisory Council on Adolescent Pregnancy, on the advisory panel of Johnson & Johnson’s National Urban Adolescent Pregnancy Initiative, and on the Task Force for State and Local Coalitions of the National Campaign to Prevent Teen Pregnancy chaired by Governor Tom Kean. She has authored many articles on sexuality education and appeared on numerous radio and television shows. 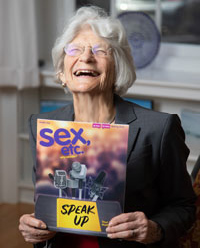 Wilson was the founding publisher of Sex, Etc., originally a free newsletter, which developed into a four-color magazine, and a web site, www.sexetc.org, written by New Jersey teens for teens across the nation. At its high point, 1.3 million copies were distributed in high schools and community agencies. The magazine is celebrating its 25th anniversary in 2019; it is estimated that 52 million young people have accessed the website to read the teen-written articles. When she was First Lady, Hillary Clinton presented teens from Sex, Etc. with an award at The White House.

Over course of her career, Wilson received local, state and national awards. In 2018, she received a Centennial Award from the Princeton Family YMCA; in 2003, she received awards from the National Association of Social Workers of NJ (Citizen of the Year), the Business and Professional Women of NJ (Woman of Achievement) and National Organization for Women of NJ (Women Making History). She received the Society for Adolescent Medicine’s regional award and the YWCA of Trenton Women of Achievement Award in 2001, the Richard J. Cross Award for distinguished contributions to the field of human sexuality from the Robert Wood Johnson Medical School in 1998, and a Children’s Defense Fund (Washington, DC) Leadership Award in 1987.

Wilson, a graduate of Vassar College, Poughkeepsie, NY, received an M.S.Ed. (Master of Science in Education) degree in education supervision and administration from Bank Street College, New York, NY, and volunteered as a remedial reading teacher for five years in the public schools of New York and Washington, DC. Early in her professional life, she also worked as an education reporter for Life magazine for three years.

A resident of Princeton, she enjoyed a 54-year marriage to Donald M. Wilson, (born in Glen Ridge, NJ) who died in 2011; a foreign correspondent with LIFE magazine, he served in President Kennedy’s and President Johnson’s administrations. When he left the federal government, he became corporate vice president of Time Inc. and, when he retired, the founding publisher of NJBiz. Wilson is the mother of three and grandmother of five. Her mother, Katherine K. Neuberger, was a distinguished Republican political leader who served as chairman of the New Jersey Board of Higher Education and was appointed to various government positions by governors of both parties. Neuberger was awarded an honorary doctorate by Rutgers University President Edward J. Bloustein in 1979.

Recently, Wilson served on the board of trustees of the Princeton Area Community Foundation and the board of New Jersey Policy Perspectives, a progressive statewide think tank. During the 2016 and 2008, she worked as a volunteer in several states for the Hillary Clinton’s presidential campaign. 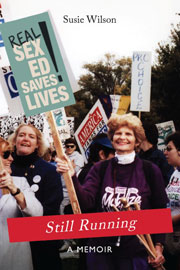 Susie Wilson’s memoir, Still Running, offers selected stories from her life, which began with her traditional upper-class childhood in New York City in the 1930s. Wilson outgrew the restrictions imposed on young women of her time and went on to land a reporting position at Life magazine, join her husband, Donald Wilson, as he played a key role in John F. Kennedy’s presidential administration, and help First Lady Jacqueline Kennedy start The White House School for her daughter and other preschoolers. The memoir also recounts Wilson’s friendship and world travels with Bobby and Ethel Kennedy that changed the course of her life when she began to understand and advocate for major educational, social and political issues. Still Running is a moving story of one woman’s determination to improve the lives of American teens through honest, accurate sexuality education in the public schools. It is also the story of one of Wilson’s other passions—running—which she began at 50 years old and culminated in completing the New York City Marathon at age 67. “Are you still running?” many people ask Wilson. Her memoir answers this question in multiple, revealing ways as she recounts the creative path she forged to try to raise a loving family and make a difference in the world.