It’s important to look at the types of contests in which women are running to determine their likelihood of winning. In 2016, 4 (3D, 1R) women are nominees for open U.S. Senate seats, compared to the 7 (4D, 3R) women who ran for open seats in 2014 (1). Three incumbents are seeking re-election and eight women are running as challengers.

Twenty (14D, 6R) women currently serve in the U.S. Senate. Two incumbent women senators stepping down this year, including the “Dean” of the U.S. Senate women, Barbara Mikulski (D-MD), and Barbara Boxer (D-CA). A new woman senator is guaranteed to be elected in California’s Senate race to replace Boxer, since the state’s top-two primary resulted in the nomination of two Democratic women – Kamala Harris and Loretta Sanchez. The winner of that race will become the first woman of color elected to the U.S. Senate from California and only the third woman of color ever to serve in the Senate from any state (2). A Sanchez victory would give the Senate its first Latina.

Fifteen (11D, 4R) incumbent women senators are holdovers who will remain in office through the 115th Congress. Three (1D, 2R) incumbent women are up for re-election. Two of those women, Senators Lisa Murkowski (R-AK) and Patty Murray (D-WA) are likely to keep their seats. Senator Kelly Ayotte (R-NH) is engaged in a competitive bid for re-election against current New Hampshire Governor Maggie Hassan, but no matter the outcome, a woman will hold the NH seat. Their race is rated as a “toss-up” by the Cook Political Report.

Based on the most recent ratings, Tammy Duckworth (D-IL) is favored slightly to win in her challenge against incumbent Illinois Senator Mark Kirk (R). Three more women candidates for the U.S. Senate, all Democrats, are in contests rated as toss-ups by the Cook Political Report, including challengers Deborah Ross (NC) and Katie McGinty (PA), and Catherine Cortez Masto (NV), who is running for the open seat created by Senator Harry Reid’s (D) retirement. With major party nominees in four of the seven U.S. Senate races currently deemed toss-ups, women candidates will play a key role in determining the partisan balance of power in the U.S. Senate in 2017. 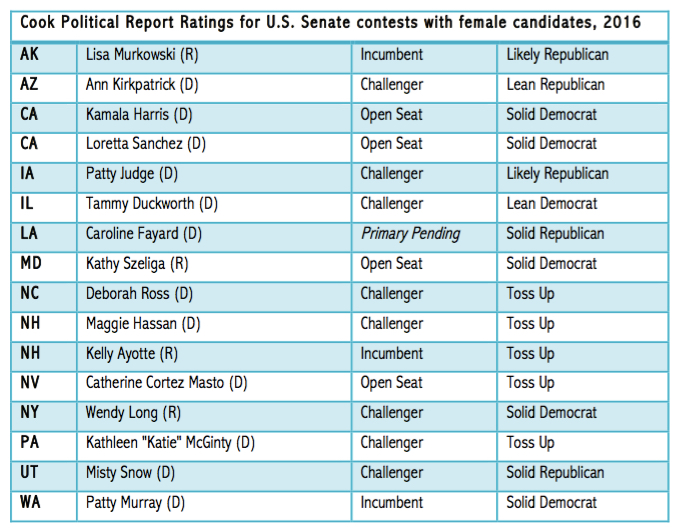 The remaining six women nominees for U.S. Senate seats face strong headwinds going into November. According to the Cook Political Reportratings, the Arizona race in which Ann Kirkpatrick (D-AZ) bids to oust Senator John McCain (R-AZ) is leaning toward the incumbent. Patty Judge (D-IA) is rated likely to lose her challenge to incumbent Senator Chuck Grassley (R-IA). The contests of three more women nominees – Kathy Szeliga (R-MD), Wendy Long (R-NY), and Misty Snow (D-UT) – are rated solidly in their opponents’ favor. Finally, while Caroline Fayard (D-LA) is still in the running for Louisiana’s Democratic Senate nomination (to be held on November 8th), that seat is considered solidly Republican.

In 2012, a record 5 (4D, 1R) new women were elected to the U.S. Senate. Based on current ratings, up to six new women, all Democrats, could be elected to the U.S. Senate this year (Duckworth-IL, Harris/Sanchez-CA, Hassan-NH, Masto-NV, McGinty-PA, and Ross-NC.) There are no likely Republican gains for women in the Senate, and one Republican woman – Kelly Ayotte (R-NH) is at risk of losing her seat. Accounting for retirements and current ratings, the number of women in the U.S. Senate in 2017 is likely to range between 19 and 23, not departing dramatically from the current 20.

In addition to tracking the numbers of women winning U.S. Senate seats on Election Day and closely monitoring the most competitive races with women running (see table above), we will be watching these races where women have the potential to make history:

Finally, the three states that currently have women-only delegations in the U.S. Senate – California, New Hampshire, and Washington – are likely to maintain that distinction. An all-woman delegation is guaranteed in California and New Hampshire, where women are all major party nominees; in Washington, incumbent Patty Murray (D) is highly likely to be re-elected.

Notes
(1) If Caroline Fayard is successful in her bid for the Democratic nomination in Louisiana on November 8th, she will represent the fifth female open seat Senate nominee in 2016.
(2) To date, two women of color have served in the U.S. Senate: Carol Moseley Braun (D-IL) from 1993 to 1999 and Mazie Hirono (D-HI) from 2013 to present.
(3) Harris is also poised to join other potential House newcomers Pramiya Jayapal (D-WA) and Lathicka Mary Thomas (R-FL) as the first Indian-American women to ever serve in the U.S. Congress.