"Pink Wave": A Note of Caution

News of the “Pink Wave” of women candidates was ubiquitous ahead of and after the first anniversary of the Women’s March. Cover stories and in-depth investigations into women running for office in 2018 rightfully celebrated the increase in the numbers of women running this year. At CAWP, we are the ones keeping those numbers, tracking potential candidates for Congress and statewide elected executive offices nationwide. We’re celebrating as well, thrilled to see women candidate numbers that are almost guaranteed to break records at every level. But we also know that there is more to this story, and ignoring important context in which to digest these candidate numbers risks inaccurate, and perhaps unfair, conclusions come Election Day.

So before we go surfing this wave, here are a few currents to consider.

Among likely Senate candidates, the gains are larger for women - Democrats and Republicans – than men from the 2016 to 2018 cycles, but women are not alone in increasing their numbers this year. 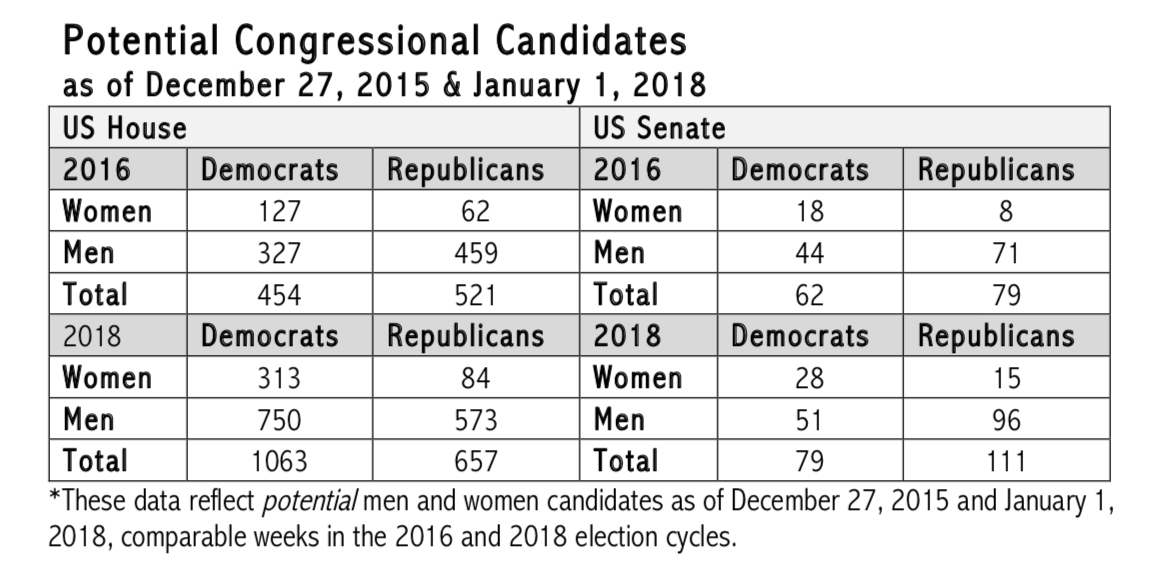 The gain in women’s presence among the pool of likely candidates is notable, but may also be surprisingly low to many reading about a new “year of the woman.” When the rise among male candidates discussed above is taken into account, however, this makes much more sense. It’s only when women’s rise in candidacies significantly outpaces men’s that women will move closer to gender parity among potential congressional contenders. 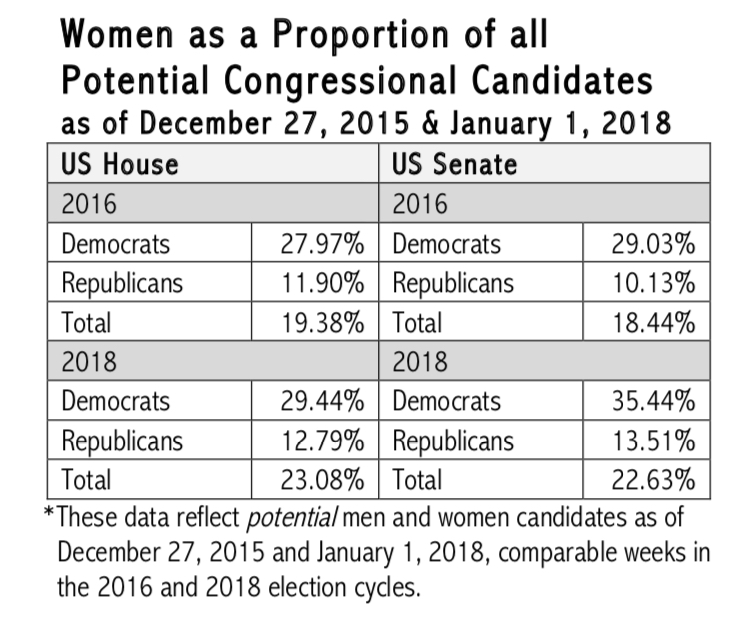 3. The “Pink Wave” hues blue. The increases in women’s – and men’s – potential U.S. House candidacies are greatest among Democrats. Moreover, the representation of women among potential Democratic candidates for both the U.S. House and Senate is significantly higher than among potential Republican candidates, consistent with the disparities in representation among Democratic and Republican women in Congress today.

Is this disparity consistent with previous cycles? Yes. The dearth of Republican women candidates is not unique to 2018. In fact, looking at the change in Democratic and Republican women’s proportions of their parties potential candidates from 2016 to 2018 shows the partisan story hasn’t changed much, especially among House contenders. The proportion of women among potential House Democratic candidates increased by about 1.5 percentage points from 2016 to 2018, while the proportion of women among potential House Republicans rose by three-quarters of a point.

Celebrating the rise in women’s candidacies in 2018 is more than merited, but recognizing these electoral dynamics is important for a few reasons. First, being clear about the challenges women candidates will face in 2018 ensures that expectations of a drastic rise in women’s representation after Election Day are tempered and a more modest gain in women’s officeholding is not misinterpreted as a failure. Second, including men in our analyses provides a stark reminder of women’s overall underrepresentation among candidates and officeholders and, thus, the progress still left to make for women to reach parity with men in political power. Finally, these data should serve as motivation to push for greater women’s political empowerment on both sides of the aisle, both in this and future election cycles.

This is not the first time CAWP has issued caution ahead of a proposed "Year of the Woman." Check out this fall 1992 newsletter column from CAWP founder Ruth Mandel, which struck a similar tone. That year, women did nearly double their numbers in Congress, but remained just 10% of all members of Congress.