"Our dream is a generation of young people who expect and believe that leadership should be diverse in every way." – Debbie Walsh, Director of the Center for American Women and Politics (CAWP), Rutgers University This week, the Center for American Women and Politics (CAWP) was proud to join the White House and the U.S. Department of Education in co-sponsoring the Conference on Girls’ Leadership and Civic Education at the White House. The Conference was intended to move the ball forward on President Obama’s pledge to promote political and economic equality for all women through the Equal Futures Partnership. To do so, the conference co-hosts brought together scholars, public officials, leaders of youth-serving organizations, media experts, business leaders, educators, young leaders, and others to address questions and concerns related to civic engagement, gender, and public leadership. The conference posed the following questions: 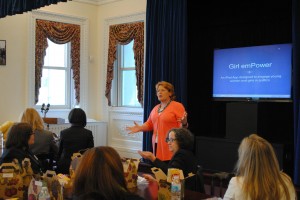 These questions are broad and have no simple answers, but the dialogue begun by two expert panels, five productive breakout sessions, and insights from two female members of the U.S. Senate (Collins and Heitkamp) was incredibly valuable to informing action that organizations, media, educators, and others can take to better reach the goal laid out at the start of this post. Conference panelists and speakers focused on the importance of early intervention to introduce young girls and boys to images and ideas of public leadership that are both accessible and diverse. They emphasized the need to combat countervailing pressures, particularly for girls, that divert them away from leadership and/or cause them to question their ability, intelligence, or willingness to stand apart from the crowd. Many participants cited the need for and utility of role models and mentors who  allow girls to both imagine themselves as public officials and, in some cases, provide them the tools and the advice to find political or policy success. From including more female leaders in classroom 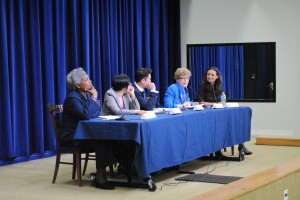 materials (or even posters!) and media images to connecting young people directly with female leaders in their communities, adults from all sectors (educators, parents, media, politicians, organization leaders) can, as Ruth Mandel (Director, Eagleton Institute of Politics, Rutgers University) said on Monday, “contribute to making the idea of woman political leaders seem natural, even inevitable.” Dr. Jill Biden kicked off the conference by sharing a story about her own daughter, who was lucky enough to see women’s political leadership first-hand at a very early age when her father (then-Senator Joe Biden) took her to the U.S. House of Representatives to advocate for an issue she cared so deeply about – dolphin safety. Lobbying then-Representative Barbara Boxer (CA), Biden’s daughter not only met a powerful woman whom she could emulate, but – according to Dr. Biden, “She saw that she could effect change.” 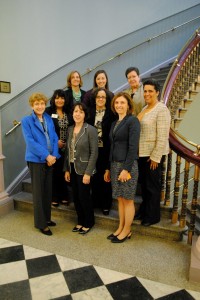 CAWP has spent more than three decades dedicated to harnessing public leadership in women and girls, from our work with the Public Leadership Education Network to our NEW LeadershipTM program for college women (now in 24 states). We are especially proud to be launching a new initiative, Teach a Girl to LeadTM (TAG), which will be a national education and awareness campaign to re-envision what public leaders look like. TAG will draw upon the experts and organizations who participated in the White House conference, many of whom are already project allies, to meet its goals of better integrating gender into civic engagement and education, and public leadership into efforts aimed at girls’ empowerment. Our staff left Washington, DC with new wisdom, new relationships, and renewed energy to inspire and engage a new generation of women leaders. We look forward to your ideas, support, and enthusiasm to make our dream a reality. To learn more, visit our website and check out photos from the conference.