On Importance, Power, and Politics

On April  16, the Center for American Women and Politics welcomed Melody Barnes - former assistant to President Obama and director of the White House Domestic Policy Council – as this year’s Senator Wynona Lipman Chair in Women’s Political Leadership. Barnes spoke on Policies that Empower: The Journey from Vulnerability to Engagement, detailing the policy agenda that she deems essential to moving our country forward – particularly among the most vulnerable and most growing populations of Americans. 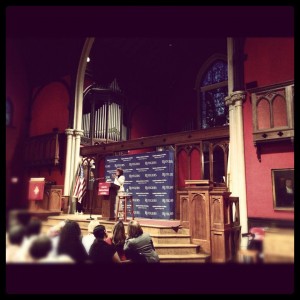 In addition, Barnes paid tribute to the Chair’s namesake – Senator Wynona Lipman – by detailing both her accomplishments and her legacy. While Senator Wynona Lipman became the first African American woman elected to the New Jersey State Senate in 1971, her legacy is not simply as a “first;” she is best remembered as an advocate, activist, and champion for those whose voices could easily be left unheard in the halls of power. In her remarks, Barnes referred to a quote from Senator Lipman that shaped the remainder of her speech. Senator Lipman frequently told young people, “If you want to create change, don’t just get to know important people, become important people.” This message resonates amidst recent discussions about “leaning in” not only to make a difference in your own life, but also to affect the lives of others. Women in politics have begun to heed this message. Women play an essential role in electing our political leaders; they vote at higher rates and in higher numbers than their male counterparts, and women’s votes have decided the outcomes of recent elections. While this could be viewed as women supporting other important people, women voters have proven that they, in fact, are some of the most important people in electoral politics today. But women’s political participation should not stop at casting ballots. To take Senator Lipman’s words truly to heart, women should fight for their rightful places at decision-making tables throughout our nation, whether on councils, boards, or in our state and federal legislatures. Senator Lipman knew that advocacy and activism are essential to make change, but being in positions of power to heed the calls of advocates in creating policies or statutes is essential. And, as Barnes noted, Senator Lipman emphasized follow-up to ensure that once on the books, laws were enforced effectively. Melody Barnes shared her journey to becoming an important person who was able to sit at some of the highest decision-making tables in the land – advising President Obama and shaping his domestic policy agenda. She has followed Senator Lipman’s advice and has made tangible change – from helping to craft and pass the Affordable Care Act to enacting education reforms from early childhood to higher education. But what Barnes reiterated in her remarks were the ways in which we all are, or can become, important people by harnessing the power we already hold (and of which we are often unaware) to make change in the areas we choose. Politics is an opportune site for harnessing that power, and it’s one where women must engage to create the lasting change they seek.