The following blog is a guest post from Felise Ortiz, a senior at Rutgers University-New Brunswick, double majoring in Political Science and Women's and Gender Studies with a minor in Spanish. She is an alumna of the NEW Leadership NJ Class of 2011. Felise is the Founder and President of Douglass D.I.V.A.S., a female empowerment student organization at Rutgers University. She is also an Institute for Women's Leadership Scholar as well as an Eagleton Institute of Politics Undergraduate Associate. 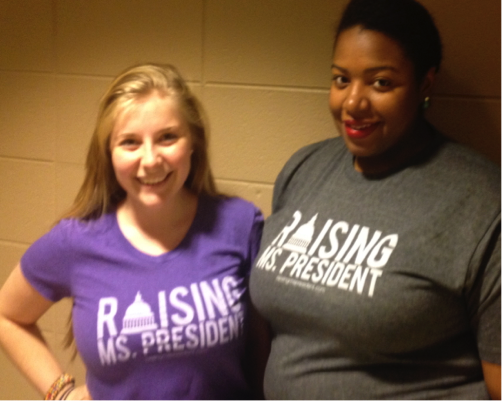 Jennifer Osolinski (L) and Felise Ortiz (R)
The underrepresentation of women in politics in the United States is an issue that needs to be addressed immediately and with urgency. With the help of the Institute of Women’s Leadership, my partner Jennifer Osolinski and I were able to facilitate a conversation addressing this issue. Our social action project was not only an opportunity to hone our feminist leadership skills but it also served as testament to the fact that the personal is indeed political. As former Eagleton and CAWP interns, Jennifer and I wanted our event to make at least one young woman consider a first step in the direction of politics. We were inspired by programs such as NEW LeadershipTM and Ready to RunTM because they inform women about the current political climate and encourage them to become involved in public service. While strategizing on how to reach a youthful audience, we were approached with the possibility of doing a film “Raising Ms. President” a new documentary about getting girls politically active. Once we watched the trailer, we agreed that it would be a great foundation for our project and our overall message. I learned a lesson in patience and professionalism from this portion of the experience. I also learned that is apart of the feminist model of leadership to use your network. Our networks ultimately resulted in three amazing panelists and the film arriving on time. We had an audience of about twenty-five people who were enthusiastic about the film and project as a whole. I had a list of prepared remarks and questions for the panelist. However, I learned the most from the audience’s engagement with the panelists. There were many though-provoking questions asked and answered. The key moment of the event for me occurred after most of the attendees departed and two panelists were left talking passionately about campaigns. One woman was a Caucasian Republican representative from a suburban town and the other was a Black Democrat from an urban city, and they were networking. I watched politics (how it should work) happen organically with two women who shared a love for public service. This project has taught me three key lessons: 1. The message is worth the madness. We were able to spread our message that women’s political involvement is important and can be transformational when it is made a priority. Any of the difficultly that we may have faced along the way was well worth it. 2. Not only is the personal, political but also the political is often better executed when it is personal. The research and our panelists attested to the fact that there is a dire need for more women in office in order for issues that affect women to be adequately advocated for. Another example would be my personal connection to this project, made me invested enough to see it through to the end. 3. Social justice based women’s leadership has been and will continue to be a force to be reckoned with. During this process I have been inspired by the social action projects of my classmates and how we have rallied together to support one another. The bond we created through this experience has strengthened me and I am truly grateful to have had this opportunity.
Candidacy
History
Leadership
Presidency
young women