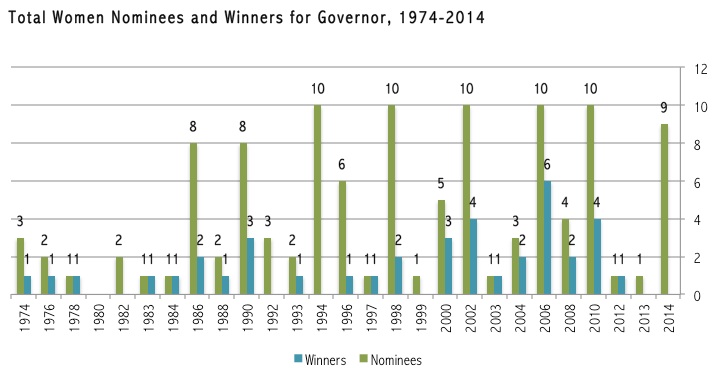 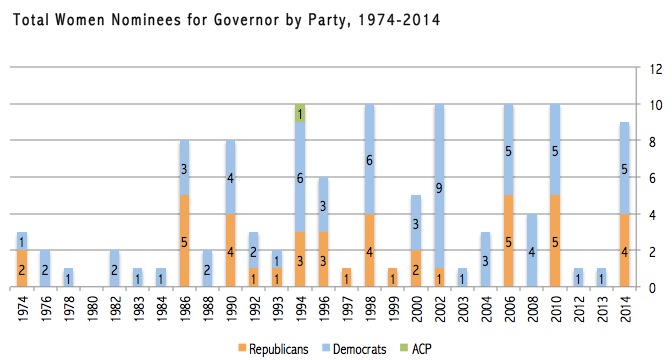 In addition to these women candidates and nominees, Delegate Donna Christensen (D-Virgin Islands) was successful in her primary bid to become governor of the Virgin Islands. Christensen is the only non-incumbent woman of color to make it to a general election ballot for governor this year. Two more female gubernatorial nominees in 2014 are women of color, incumbents Susana Martinez (R-NM) and Nikki Haley (R-SC). Both women were elected in 2010 as the first women of color to ever serve as governors in the United States.[3] Six more women of color filed in gubernatorial races this cycle, but did not make it to the general election, including two women in Florida and two women in Texas.[4] 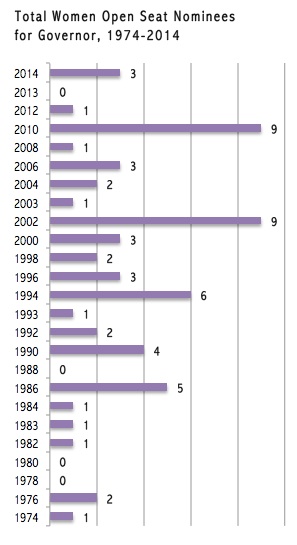 All five of the non-incumbent female nominees for governor this year are Democrats. Three women candidates – Martha Coakley (MA), Gina Raimondo (RI), and Wendy Davis (TX) -- are running for open seats. Two women candidates – Susan Wismer (SD) and Mary Burke (WI) -- are running as challengers. Women have fallen short of making history as candidates, nominees, or open seat nominees in both major political parties this year. When compared to the most recent cycles with similar numbers of gubernatorial seats up for election, more women filed as candidates for governor this year, but fewer women made it through their primaries. 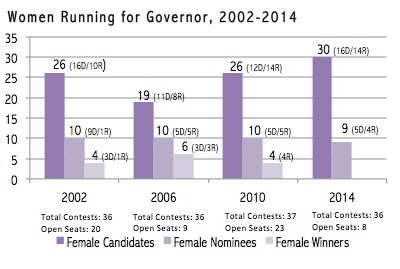 In 2002, a record 4 (3D, 1R) new women were elected as governors. We are unlikely to exceed that number of new women winning this year. Moreover, based on these estimates, we may end up with the same number of women governors as in 2014 (5), changing only the partisan balance among women governors. The record number of women serving as governor simultaneously is nine, achieved in 2004 and 2007. What to Watch on Election Day In addition to tracking the numbers of women winning gubernatorial offices on Election Day and closely monitoring the most competitive races with women running (see table above), we will be watching these races where women have the potential to make history: To date, 35 women (20D, 15R) have served as governors in 26 states. In addition, one woman has served as governor in Puerto Rico. Based on current ratings, two more states (RI and WI) and one territory (VI) have the potential to break this gubernatorial glass ceiling in 2014. However, to put these numbers in context, the number of men who will serve as governors in 2015 is greater than the number of women who have ever held gubernatorial office. For the latest numbers and information about women running for office in 2014, visit CAWP’s Election Watch 2014 and check out our next post, reporting on the scary statistics on women in the 2014 elections. You can also follow the conversation on Facebook and Twitter by using the hashtag #WomenRun2014.
[1] Of the 36 gubernatorial contests in 2014, only 8 are for open seats (AZ, AR, HI, MD, MA, NE, RI, and TX).
[2] Women who are third party candidates are included if their parties have recently won statewide offices. ACP refers to “A Connecticut Party.”
[3] Sila Calerón was elected governor of Puerto Rico in 2000 and served until 2005.
[4] In addition to Yinka Adeshina (R-FL), Elizabeth Cuevas-Neunder (R-FL), Lisa Fritsch (R-TX), and Miriam Martinez (R-TX), Lynette “Doc” Bryant (D) filed as a candidate for governor of Arkansas and Linda Lopez (D) filed as a candidate for governor of New Mexico.
2014 Election
Candidacy
Governors
Race