We’re launching our week-long countdown to the midterm elections with the outlook for women running for the U.S. House of Representatives. While we have not seen record numbers of women candidates or nominees this cycle, we may see a record number of women serving in the U.S. House come January 2015. Candidates and Nominees 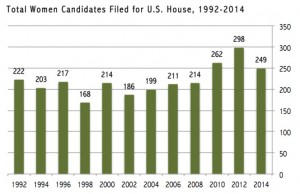 It’s important to look at the types of contests in which women are running to determine their likelihood of winning. In 2014, 18 (11D, 7R) women are nominees for open U.S. House seats, compared to the record high of 39 (26D, 13R) women running for open seats in 1992. As the charts below show, women have fallen short of making history as candidates, nominees, or open seat nominees in either major political party this year. However, while the number of female nominees dropped between 2012 and 2014 for Democratic women House candidates, there was a slight increase, from 48 to 50 nominees, among Republican women candidates, with the Louisiana race still pending. 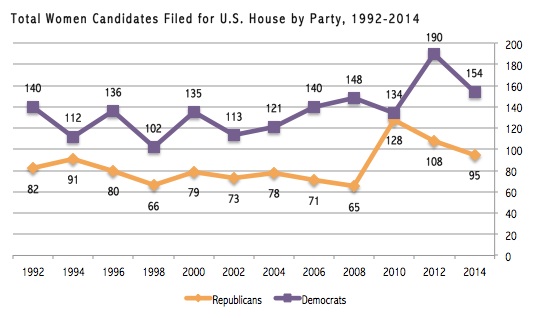 Women in the 114th Congress
It is likely that we will see an increase in the total number of women serving in the U.S. House in the 114th Congress from our current class of 79 (60D, 19R) women members and 2 (2D) female delegates, but the size of that increase depends on how the most contentious races of this cycle break for women candidates. While we know that we will lose six (4D, 2R) current women members and one (1D) female delegate to retirements and bids for other offices, there are six (5D, 1R) women candidates and one (1D) female delegate very likely to become new members of the 114th Congress, based on the most recent ratings from Cook Political Report. Another 4 (1D, 3R) new women are rated as likely or leaning to win House seats this year. Finally, 4 (3D, 1R) possible new women members and 3 (3D) female incumbents are competing in contests rated as toss-ups by the Cook Political Report as of last week.

Five of the eight new women most likely to win House seats, as well as delegate candidate Stacey Plaskett (D-VI), are women of color. If these new women win and all Black female incumbents are re-elected, a record 18 (17D, 1R) Black women members and 2 (2D) non-voting Black women delegates will serve in the 114th Congress.

In 2012, 19 (16D, 3R) new women were elected to the U.S. House of Representatives. We are very unlikely to meet or exceed that number of new women winning this year.

What to Watch on Election Day In addition to tracking the numbers of women winning U.S. House seats on Election Day and closely monitoring the most competitive races with women running (see table above), we will be watching these races where women have the potential to make history: Finally, while four states with no women currently serving in the U.S. House (Iowa, New Jersey, Utah, Virginia) have the potential to add women members to their 114th congressional delegations, Pennsylvania is very likely to have no women in its congressional delegation as of January 2015. For the latest numbers and information about women running for office in 2014, visit CAWP's Election Watch 2014 and check out tomorrow's post on women running for the U.S. Senate this year. You can also follow the conversation on Facebook and Twitter by using the hashtag #WomenRun2014.
[1] Three (2D, 1R) women won primaries but then dropped out in 2012, leaving 163 nominees running on Election Day.
2014 Election
Candidacy
Congress
Race